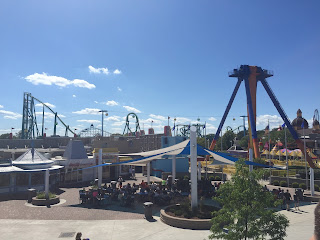 We went three years ago - and it was ok. It was a rough start for two old men and some of the coasters, but we rebounded nicely.

This year, we planned it a little better.

Since it was late in August - and a BEAUTIFUL day - most colleges have already started, and the majority of Ohio public schools had too. So we took our chances and thought it would be a great day. And it was. I think this last Monday would have been even better as any straggling schools definitely started this week.

As it was - there were few lines. The bigger ones (one 45 min, one 33) were only that long due to malfunctions of the rides themselves. The rest were less than 10 minutes each.

There is an included video below, but I didn't set stuff up as well as I should have - or done follow-up like I should have. So I'll do some fixing of that now here.

The one ride that was bad last year - Mantis - of which I hated, is now inexplicably called the Rougarou.  It's a suspended coaster, using the same track as the Mantis. It still sucks. It didn't bounce me around as bad as last time, but it did 710.

The big wooden coaster I reference which I would never ride again - I said that last year. I stuck to that this year, but didn't clarify that. Never will I ride the Mean Streak again. Horrid.

The biggest winner was the Maverick. I say it was our third attempt to ride it. This is true. What was unclear was that our third attempt in three visits to the park. The ride was closed the other two times. It was the one with the longest line this year - again, due to malfunctions and people actually hurling on it. Or peeing. Or pooping. They didn't specify what kind of "illness" they had on ride. I did notice that no one could sit in the back seat of two of the three cars. THAT can't be good.

The MagnumXL2000 (stupid stupid name) was a lot more rougher of a ride than it used to be. It may have been the second roughest ride of them all.

We only rode coasters this year. No spinney rides. Nor did we do the SlingShot ride either - first, it was $50 each (!!!!) and another $100 if you wanted the Go-Pro video of yourself.  That's bullshit. Secondly - it was a sling shot that threw you 350 ft into the air.

Millennium Force is still awesome. The poor woman behind us (in late 50s) who'd never ridden a coaster before was scared shitless - with her husband, son and myself trying to tell her how great it was. I'm glad she got on (and us too) as, shortly after, the ride closed for the rest of the day.

We skipped the Mine Ride (always do), the Blue Streak and the Raptor. The latter was where someone got killed last week for climbing the fence. You'll get a very very brief reference to that in the video.

Still - a great day. Couldn't have asked for a nicer one.

As the weekend wore on, I did have some aching to my shoulders and back. It's the small price to pay for 9-10 hours of fun.

Song by: the Ohio Players
Posted by Blobby at 12:09 AM

glad you had a good day, and did not throw yourself in front of a coaster.

you could not get me on one of those things. NEVER!

It's changed quite a bit since I was going there in the early 80's. Geauga Lake was my introduction to American theme parks and wooden roller-coasters (NEVER again).

I love a roller coaster and have been trying for years to get Carlos on one.
Ain't happening.

I used to go to King's Dominion in VA as a teenager and into my 20s. Amusement parks then lost most of their appeal for me. Glad you had a good time and good weather!

Erik Rubright said...
This comment has been removed by the author.
10:58 PM EDT

You TOTALLY missed doing a Ghostbusters quote there with Gatekeeper. *sheesh*

When I was growing up in MI going to Cedar Point was one of summer highlights; It comforts me to hear/see it is still up and running.