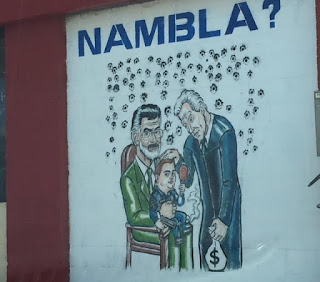 This is a gas station in Cleveland.

The man in the chair is Mayor Frank Jackson. The "boy" in his lap is Officer Michael Brelo. The man petting him, Judge John O'Donnell, who found Brelo 'not guilty' in his role of shooting two unarmed black people.

I counted the painted bullet holes, but the numbers don't match the exact number of bullets shot during that high speed car chase & shoot-out. Only about 80 of the 137 round that ended up in the vehicle are represented.

I suppose the NAMBLA reference is to how two grown men (mayor & judge) protected a younger man. The bag of money? Who knows. I don't think there was any discussion of impropriety when it came the verdict. No mention of paying anyone off.

The neighborhood down by Biggie's can be a little sketchy. While I drive down the street often, I can't say I felt horribly comfortable pulling in the lot to take the picture. There have been other paintings here I have wanted to get snaps of, but didn't have the balls.

Biggie's Foodmast (and gas station) has a history of painting things on their three exposed walls. Here is one of the other walls currently. 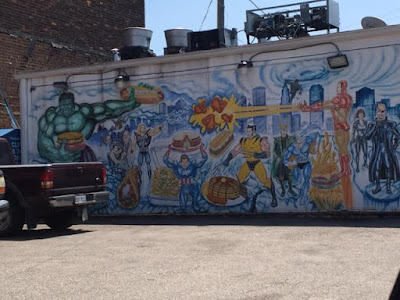 This one just seems to be superheroes doing various things.

Normally, the paintings have more of an anti-Zionistic nature. And while I know the difference between anti-Zionism and anti-semitism, I would go out on a limb to say that Biggie's clientele do not.

These are two recent and oddly less controversial renderings - not taken by me. 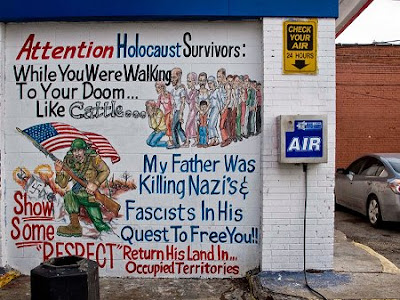 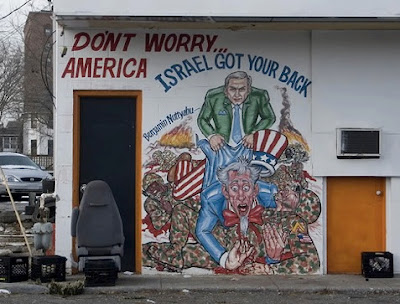 These change quite often and usually it takes a few drive-bys to figure out what they say. And by then, chances are, they've moved on to a new drawing.

I'd love to know who actually comes up with the message, who paints and how much Biggie's puts into dollars for the paint.

Maybe I'm wrong, but I would be surprised at how many of their customers are even aware of what NAMBLA was.

If another good one gets painted (and it will), I will post again from here.

Song by: Lucinda Williams
Posted by Blobby at 12:11 AM

So, a little fill'er up and some political commentary?
Now I've seen everything ... I hope.

Reminds me of things my father puts up at his business in Florida. Yet another reason to disassociate myself from the parental units. *sigh*