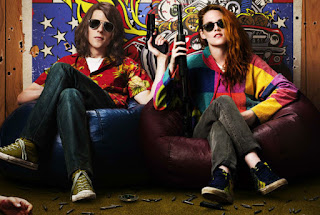 We went to go see American Ultra, but judging by everyone who was being searched on the way in, was this standard protocol for anyplace showing Straight Outta Compton?

Should I be fortunate or worried that no one searched the only two white guys in the lobby (us)?  Should I mention that all the theater employees were of color? Mind you, this was the same theater where patrons were having their heads smashed by other members of the audience (with metal bars!), so they could rob them in the actual cinema while watching a movie.

We've been to this theater plenty - never being searched. Never seeing security, even after the head-bashing incidents.

We saw previews for this when we either saw Jurassic World or Trainwreck - I can't remember which. But I turned to 710 and said it looked fun. Granted, the editing in the previews were probably a little better than the film itself, still I liked the full length film.

American Ultra will win zero awards. I won't be in many (if any) critic's top 10 movies of the year lists, but it's fun summer fare.

The story has somewhat been done before - but that's ok. There's very few new premises out there. That being said, there is a twist in the story I didn't see coming.

Normally, I can take or leave Jesse Eisenberg. Usually he's harmless....even borderline cute. But he works well here. Save for Panic Room when she was 10 (?), I've never seen Kristen Stewart in a movie. I'm not a 12 yo girl, so I've never seen (or read) the Twilight series. Allegedly she was / is great in Clouds of Sils Maria, but that was at our theater for all of two weeks, so I missed it. I actually liked her in Ultra.

Ultra is fairly fast paced and with some more than implied violence. I say "implied" because it's really there, but with much of the film taking place at night - and with good camera angles, you're spared much of the would-be gore.

If there are flaws in the movie, and there are, most are minor - and some (believe it or not) are nitpicking from me.

For some unexplained reason, I kind of like Topher Grace. But he's done this exact same role as the young upstart who is cocky and ultimately wrong. I can't remember the name of the movie, but it had Dennis Quaid and Scarlet Johansson in it.  Tony Hale is always playing the almost bumbling assistant. And I like Connie Britton, but it seems like she was either miscast for the role or had zero time to prep. She did ok, but I wanted more. Bill Pullman and his probable TMJ? While he was fine in his bit part, there was a portion of it that just didn't fit into the movie, though I doubt a single person other than myself noticed.

The movie is a little messy, but fun. I'd venture to guess not as good if Eisenberg and Stewart weren't in it. They seem appealing throughout. I'd give it a solid B........maybe even a B+

Seriously? Head bashing in a movie theatre? I'll sinseriously wait for iTunes ...thanks.

is THIS part of the movie-going experience? no thanks! I'll attend my local art house cinema instead of the multiplex!

Was it a Regal Cinema? They announced that they will start checking bags at all locations after the shooting in Louisiana.