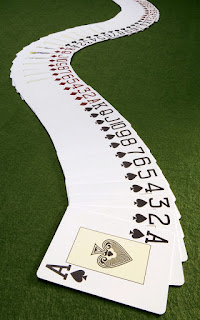 It's no biggie - but yesterday was the birthday.

Normally, I don't even care to write about it much, but it's nearing midnight and I don't have anything planned or drafted - so you get what you get.

It is a day I don't really care that much about one way or the other. I'm happy 12 of 12 lands on the 13th, as it saves me from it to a degree. Yes, I'm getting older, but really, what is the alternative?

While it's not a 'milestone' birthday, I mean, after 50, aren't they all? I'm vertical, so that's something.

I'm 52.  Fifty-fucking-two.  I've said it before and probably will again - no one expected me to live this long, let alone me. But now I'm in it for the long haul.

Or as a friend put it to me yesterday - you're now a "full deck".  I had never heard that phrase before, let alone related to age.

Well, I suppose it is true, but that leaves out the Joker - and isn't that the irony!

For me, the day was nothing special and I was glad 710 did little to make it that way. We did go out to dinner and we invited my mother, who was very excited for the invite and accepted very quickly - which makes me glad we asked her to go with.

She was quite talkie, which was good. It was a nice night out for her, which it made it good for us. While I invited one of my sisters, I'm kind of glad she had other plans - though I didn't know I'd be glad about it at the time.

Another year come and gone, and I'm ok with it.

The bonus of the day is talking to people I might only chat with a few times a year. A text from David G (who now only remembers the day thanks to FB, though I will give him credit, as on August 1 he texted me to wish me a happy birthday knowing he finally got the month correct). A call from my friend Doug in Chicago - as we are separated only by three days in birth. A card from Jon - who is always scarily reliable about that.

In the big picture though - nothing to see here, except for another round and another shuffle.

Email ThisBlogThis!Share to TwitterShare to FacebookShare to Pinterest
Labels: Birthday

Happy birthday from another full deck (with 3 jokers). And is that the same Jon whose boss is named Ruckiry?

Well let me be the very first to wish you a very very early Happy Birthday 53. Just as I was the first one this year.

And thanks for giving me credit for my awesome improvement over the years. I'm so glad I could help you celebrate not only your special day, but celebrate your wonderful wonderful friends.

HAPPY BIRTHDAY BLOBBY! and I hear ya on the low-key celebration stuff!

Belated, but sincerely felt, best wishes to you, Sir. Take it from someone who knows, that if your notching up the years doesn't already feel like an achievement as the number grows, take heart that they don't yet feel like a wonderment or, still more, like miraculous. That will all come in time. Have an especially auspicious and successful year to come in all ways, but healthwise above all.

Happy Birthday! How can we be this age? I have pictures older then I am in my minds eye (the subject of my birthday posting coming in a couple of weeks.)

I do hope your next year is your best one yet.
You were wondering our ages; I am 53, so my full deck as an extra joker in it.

Ahhh, 1963 was your year. I catch up to you early January. I guess that makes me still one card short of a full deck....for a few more months.
Happy belated birthday Blobby!

While I'm just now reading this post, I hope I get 'credit' for the birthday wishes on facebook. ;-)

Glad you had a nice, quiet birthday; apparently the way you like it.

A full deck, eh? Something no one has ever said about you having before, I'm guessing?