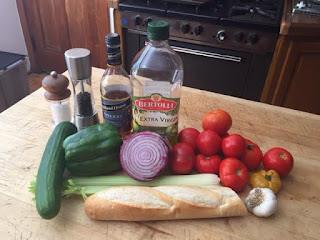 No heat here. Not today.

I'm trying gazpacho again. I did it a few years ago and it was ok, but just ok.

But this last weekend, Georty gave us a heap of fresh tomatoes. None of that store-bought, green-house raised crap.

We ate two just plain with a little salt and pepper - SO good. But the problem was, they were ripe when picked, so there is a limited window to use all of them, and I didn't want them going bad.

Rebecca's mother-in-law steered me towards a different kind of gazpacho - Andalusian Gazpacho. It's more Spanish than Italian. There are a few differences, one that no tomato juice is used (hallelujah!) and the other is that it is smooth - no chunks. The latter could be a problem. The former, not so much.

I LOVE tomatoes. But I am no fan of tomato juice. I make a mean tomato soup (if I say so myself), but just juice makes me gag. Straight vodka is better than a Bloody Mary.

Both 710 and I like our gazpacho chunky, but I was willing to try this - but I was smart and reserved some of the veggies for later, in case I needed to chunk-it-up.

There are a ton of recipes out there for this - no two are the same. So mine wasn't like any of them, I just kind of tried to keep to the tone, but played with it a bit. The ingredients and amounts are mine. 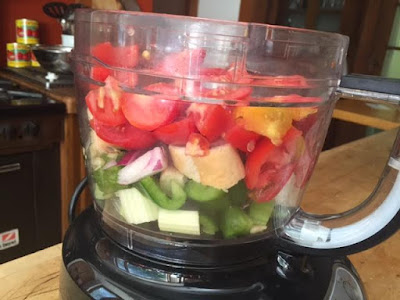 Put the first six ingredients into a food processor. Pulse for 3-5 minutes. Slowly pour olive oil and vinegar in during this process. 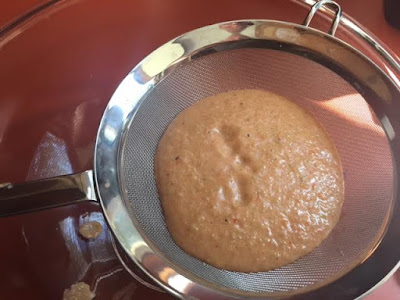 Through a sieve, let liquid pass through, leaving the solids in the sieve.

Great in theory, bad in reality. Sieve was too small in grates. What liquid got through was like dribbles of piss. The gazpacho as is, out of the processor, was pretty smooth. Smoother than I've ever had. Too smooth even then. The sieve thing was not going to work for me.

I poured everything, as is, into the bowl.

So I went and coarsely processed more cucumber, onion, celery and peppers. Not too coarse, but....still.... 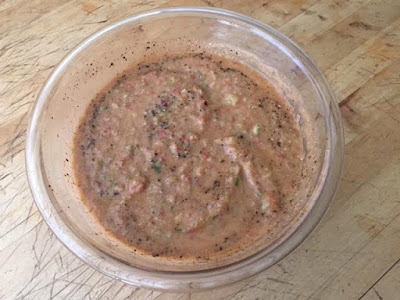 It's not red, like other gazpacho. I guess because no tomato juice. 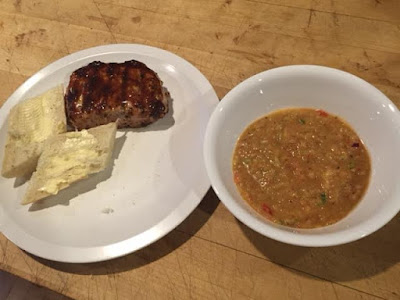 It also had little flavour.  We added more salt. We added another tablespoon of vinegar, and it brightened things up a bit, but I wouldn't say enough.

Maybe I'm not just not the guy to make gazpacho.

I'll send you my gazpacho recipe. But also, keep in mind that gazpacho needs to sit awhile before enjoying....at least 4 hours in the fridge.

I make mine and thjrow in some ... well, one ... chipotle in adobo sauce while I puree. It gives it a nice kick!

I'm not a big fan of it unless its highly seasoned. Good for you for trying to make your own though.

Color is um....not pleasing to the senses. We ate all our Georgie tomatoes as blts.