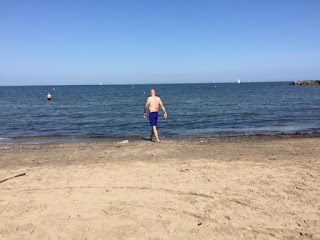 Summer has been funny this year.

Not 'ha-ha' funny, but a little weird.  The first month and a half it was rain all the time. I thought for sure we'd rival our wettest year on record had it continued. But the last three weeks - or so has barely seen a drop, and our days went from the 60s to the 90s.

There is a lake near my parent's house. On one such day while checking on my mother, I stopped at the lake and just jumped in. Well - I guess I swam to the docks they have anchored far in the deep end.

While there were a dozen or so people on the beach - kids and their mothers mostly, I was the only person in the water. My mother and one of my sisters would confirm for me later than almost no one goes to 'the beach' anymore - no matter how hot the day. And it's not like ours was a 'hood where people had their own pools. I can think of only two out of a few hundred houses who have that - and one of those, the guy (a judge) killed his wife there, so no one was ever going near that house.

The other house was smart enough not to ever really make friends with anyone, so no one was ever in their pool - themselves included.

Tons of kids were at the beach. Granted, we belonged to a country club too, so we had use of that pool as well.

But this last Sunday I did something I have never done. Gone into Lake Erie.

Erie, being the shallowest of the Great Lakes looks pretty and is expansive. And while I've lived near it most of my life, other than going in ankle deep (and that's even a maybe) at Cedar Point, I've never been in it.

While it is cleaner than it used to be, like many of the Great Lakes near major cities, it is prone to bacteria levels, due to sewage run-off, and lord knows what else goes on in those waters. And with chemicals coming from farming, the last few years have been horrid for algae bloom, making the city water of at least Toledo undrinkable for days. Maybe longer.

Just another sign that the EPA has almost no clout, when farming and chemical companies can ruin the one natural resource they actually need to farm.

But David and I were doing yoga at the beach (again) this last weekend, and it was going to be a hot one, so I made a plan. After yoga was done, I took off my shirt and walked into the water and dove right in.

At its warmest, Erie might get to 77 degrees. I don't think it was there, but I was so warm from an hour flow class, the water might have seemed chillier than it actually was. Mind you, after you go in, you're fine almost immediately. 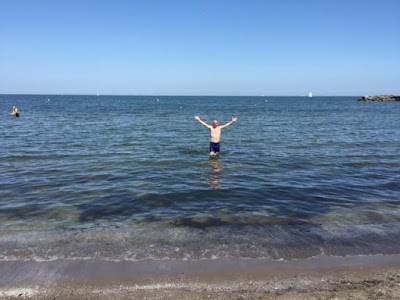 ....stood for a few minutes chatting with two other yogis who waded in a little bit - and then I was out, changing into a dry pair of shorts, so as not to sully David's car seats.

No offense to David but what a horrid picture. Not the composition, just the subject.

My head is tan from cutting the lawn and walking Mr. Pete. As for the body, it looks like I have a white t-shirt on.  It's a little frightening.

Not that is was on my Bucket List - not that I even have one - but if I did, I guess I could check this one off.


Song by: the Decemberists
Posted by Blobby at 12:01 AM

It surprises me how many people here go to the beach but do not get in the water. I think many have chosen air conditioning over swimming to cool down in the summer. Back in the day, that wasn't an option.

And... in that last picture, I feel like you have either a Village People song playing, or else you're pretending you're Jebus on the cross.