I won't say the basement is done done, but close enough.

We moved the washer and dryer back, and even rearranged them so they are more convenient than the previous owners had things set up for. We were lazy 10 years ago and just kept it as is.

There are actually five rooms to our basement. We've done one of them. Though I think for the adjoining room, we will paint the walls and floor too, but the rest of the rooms will stay as is. I don't really have need to go back to the 'canning room' and spruce that up. As it is, it hold old cans of paint, tile and the likes.

Since we had been out of commission for a few weeks, I had a bunch of laundry to catch up on. I keep banging my head in the new place the washer is situated, but I'm sure I'll figure it out - or buy foam from Homo Depot.

The cat boxes are moved back down stairs. The food gets moved today. No more 'snacks' for Petey. 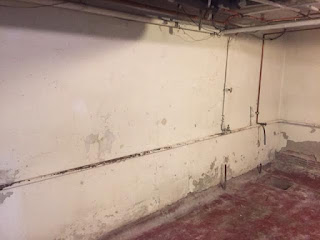 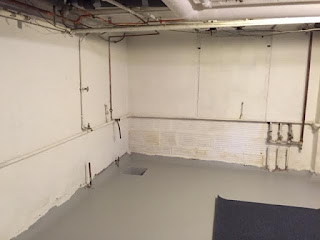 It's not quite as scary as it was. Along one of those empty walls we need some new shelves. We had some that we tore down after the flood, but we need places other than the floor to store some stuff. 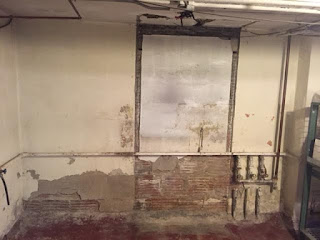 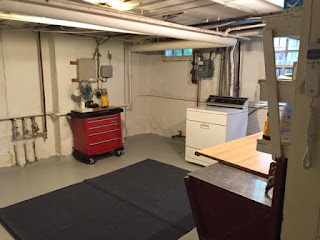 Not exact same shots, but you get the idea. Tool chest is back in place, the dryer moved a little more to the left than it had been. We wanted to get a lot more lighting down there too, and while we will, it will be less than imagined. The floor and walls make it that much brighter.

It's not as scary to be down there. Not scary at all, actually.

I don't foresee anymore basement updates for you.  Let's consider this case closed!

Song by: Deerhunter
Posted by Blobby at 12:09 AM

looks presentable; you and 710 did a lot of hard work to make it that way!

I know you may have heard this before, but that is one impressive tool ... chest.

I'm glad you resisted the urge to 'finish' the basement. People need space to store stuff and when people turn their basements into living space they often forget the storage.

Y'all did a great job!