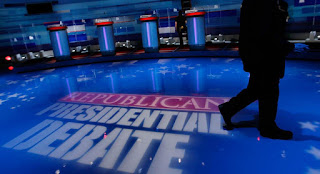 I could watch - and be horribly amused at the imploding that is sure to go on.

Or I could watch and end up holding a gun to my head and pull the trigger, in which any sane coroner would call "justified suicide".

Or I could figure out my Twitter sign-in and password to watch people just real-time recap for me, and usually with funnier quips than the 10 on stage would be doing.

Or.....and probably the real scenario: I'll read about it tomorrow.


First off - how big of a joke is this debate?   (the question is somewhat rhetorical, though I'll go on to answer it myself.)

FOX is holding it. Ok.  TOTALLY impartial here. But on the other hand, no other reputable news organization (if one exists) wouldn't (probably) even bother with this train wreck. And that tramp, Megan Someone or Other is moderating.

She doesn't have an impartial bone in her body, nor would she ever give them hard-ball questions, let alone hold them to actually answering a question.

I also believe she has personally fellated every single male candidate (multiple times) who "qualified" for the debate, which, polling numbers aside, is the only reason Carly Fiorina isn't one of the 10. {and more power to Megan for finding Christie's dick under all those folds of skin!}

I'm not sure I like the idea of the debate top 10. If you're doing just top 10 - fine. But to appease the other six losers with a kid's table debate is FOX just puckering up to their buttholes on the off chance one of those six moves up in the polls. And any number of those six (or sixteen) are sure to be FOX commentators in the next few months.

I do hope for a train wreck though, but I don't hold out hope that this will truly be moderated. It will just be a talking-over-each-other-fest.

Trump claims, if elected President, he'd tone down his rhetoric and buffoonery (my word, not his). My first question to him would be: 'based on what we've seen of you in the last 30 years (even the last 30 days), what evidence do you have to support this "claim"?

Can you imagine this blow-hard actually dealing with other heads of state?  Let's face it, we'd have a chunkier version of Putin in office.

The only other person I'll comment on today is Kasich. He's an asswipe. Another running for office with g-d's guidance. Don't you think g-d would pick ONE candidate to run, and actually HAVE him win? Kind of makes you wonder not only about religion as a whole, but to which g-d they might speak with, or what kind of a practical joker g-d is.

Anyways - I'm doubting highly that Kasich has top 10 numbers to actually qualify for this debate. What he has is: Ohio.

Kasich will claim (and claim again and again) his landslide to victory in 2014. It's true. He did.

What he fails to mention is that the Ohio Republicans spent hundreds of thousands of dollars to keep a Libertarian candidate from getting on the ballot or that the Democratic party stopped pushing their candidate months and months before the election because of his fuck ups. Kasich was basically running unopposed.........but it wasn't a landslide. Not really.

No, 710 is right. Regardless of the GOP nominee, the VP nominee will be Kasich. He doesn't have the cred or numbers to be top of the ticket, but the GOP needs Ohio to win. It's why Cleveland has the GOP convention. It's why the first debate is in Ohio. And it is why that Kasich "miraculously" wound up in the top 10 only 10 days after announcing his candidacy.


The biggest downer of this GOP debate will be - no Jon Stewart recap the next day.  Sad.

I ain't watching this shitfest either. right on, bro!

I will read about it because I, too, might put a gun to my as to what the GOP thinks are viable candidates.
But that Twitter thing sounds like the height of high-larity so I might stop in over there!