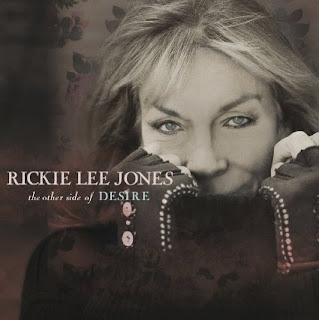 I want to say I love the new Rickie Lee Jones album, the Other Side of Desire, but so far, I'm a month and a half-in and it is not gelling with me.

Rooted and recorded in New Orleans, Jones tries to straddle the line of her version of pop with the jazz routes of the city, so it ends up not succeeding in either. In theory, that straddling could have made for a very interesting record. In reality - it doesn't.

Musically, "Jimmy Choos" is good, but Jones has some of the weakest vocals of her career on this song.  The light-hearted, almost children's song quality of "I Wasn't Here" is just distracting beyond belief. "Blinded by the Hunt", there are just times she sounds like Aaron Neville. I'm not saying this as a positive.

I really do like "Infinity".  But that is the only one that I really really like.  I can't help feeling that "Feet on the Ground" was a pseudo throwback to a Pirates era song, but not as well executed.

I can't, and don't, expect an artist to remain the same from year to year, or album to album, but I did expect more from Jones. I like how her artistry has changed on most disks in terms of style and production, but this one is not as welcome as some of her other iterations.

With the Other Side of Desire, I can listen to a song or two, but it is never an album I'll be able to sit through for an entire play.
Posted by Blobby at 12:05 AM