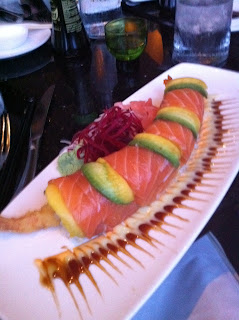 When in Tennessee this last week, we went out to eat with the entire team.  I like them all.  Very good guys....and gals.  But mostly guys.  It is the first male-skewed team I've worked on in quite a while.  That's odd for my line of work.

I like sushi, but I'm not a big sushi fan.  Two or three pieces is all I need, but usually you end up with something that's cut into 6-8.   And it's like zucchini - you can't give it all away.

This place was more fusion.  Everything had jalapeno and/or mango in it.  I had never seen that in sushi before, but I don't eat it a lot, so what the fuck do I know?

This was my dish.  The presentation was nicer than the meal, though the food wasn't bad.

It was the saké  I liked.  This was cold saké.  I'm not a fan of the warm stuff.

I was texting with Rebecca after dinner and she brought up one line from, I dunno, 23 years ago?   Yes, we remember shit from 23 years ago.

We had taken Jon out for his birthday to a Japanese place.  The kind of place where they do cooking at your table and you go home smelling like hot grease until you do a load of laundry...and have a Silkwood Shower.

I'll be honest, I don't know if he was talking about Jon, Becca or someone else. I'm sure both will claim being "the one".  And it's just one of those things that stuck.  Also that night, we started calling Jon, "Jon-san".   Anymore, it's pretty much just a Becky thing, but it's acknowledged by all.

Saké did not do the trick to get my drunk though.  I still had to hit the hotel bar for that.

It seems I've been writing more and more about my drinking.  I should watch that.  Clearly, if I'm noticing, it's becoming an issue.  Or potential issue.

On another/gratuitous note:  this was our busboy.   CUTE.  And way cuter when he flashed his teeth. 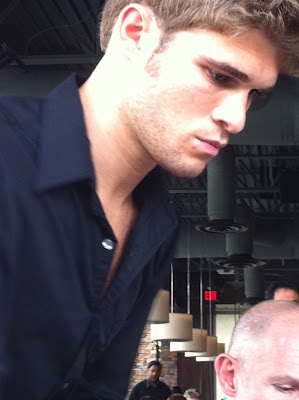 Surreptitious pictures of busboys. You are officially lecherous and that I thank you for.

cripes, he IS cute! now if he had just flashed something else...

I would like to do very very naughty things to him! :-b

I don't know that I've ever had cold sake before. Hmm. Maybe I'll find some tomorrow night after work.

YOu were creepin' on the Busboy?? you pervy old man!