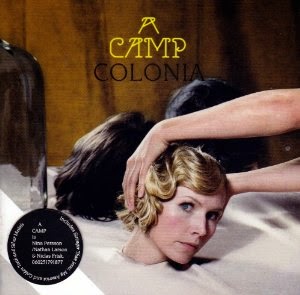 It's really a shame the Cardigans started off their U.S. career with their more than fluffy single "Love Fool". At the time it was annoying as hell and they were written-off stateside almost immediately. Upon listening to it a decade later, it is actually not a half bad song.

What is even better was their three follow-up disks which never found footing over here. I'll have to make their Long Gone Before Daylight one of my Classic disks. It really is in the top five disks of the first decade of the 21st century. Seriously!

But those three disks were eventually released here in America - a good 12-18 months after their initial European launch. So it is no shock or surprise that lead singer, Nina Persson's side project, A Camp, suffered the same fate with Colonia.

Colonia is not a bad album, but it won't hit any airwaves here - nor does it strive to. Or at least I don't think that was the intent. The group is a lot lower key than the Cardigans, and they weren't too 'out there' to start with.

The music itself is sparse - some guitars, rudimentary keyboards, drums and the occasional strings. That's it. But that combo has its moments. I really like "It's Not Easy to be Human", "My America".

There is this weird early '60s girl-group/Phil Spector vibe weaved in and out of part of the album (horns on "My America", vocal arrangement "Here are Many Wild Animals"). The latter being about survival - with references to the bomb, the ark and cockroaches. I don't think it's really about eating our young, as that is more of a metaphor than meant for literal translation. Either way - you'll never hear something like that on radio.

There are clunkers along the way - the too sleepy "The Weeds Had Got There First" and "Chinatown".

I liked the last three Cardigans disks so much, I had high hopes for Colonia, but in reality this is a so-so disk. Lots of promise and little follow-through.