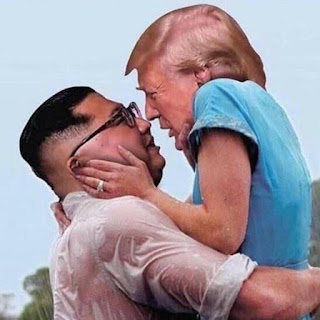 I just can't deal with the Michael Cohen shit just yet. I've barely read a thing - as if it matters. Why the testimony?  And Repubs? Why you wanna investigate Cohen now?

A.  You no longer have control of the House, so go ahead - axe.  You ain't gonna get it.

B.  Or go investigate him. I might will dig a bigger hole for your "leader" the more you uncover.

But BLOTUS looks to cozy up to the worst sort of folk - in secular life and the political one. Oh, and the familial one too.  Ick, Eric!

And by all accounts, the "summit" ended early and abruptly with little to no 'win' for the U.S.   So yes, thanks anyway.

But more importantly - once again - BLOTUS turns his back on the U.S. with his infamous lips to tuchus contact he has perfected.

BLOTUS sold out an imprisoned (in North Korea) U.S. citizen who was released and died. At the time, BLOAT has some strong words for Kim and North Korea.  Now?  Not so much.

"He (Kim) tells me that he didn't know about it and I will take him at his word."He felt badly about it. He felt very badly."

This is a man who had his half-brother killed. He has claimed to have cured Ebola.  Say he can control the weather.  (This is Kim btw, not BLOAT.)    Yet, THIS is item BLOTUS chooses to believe from this turd.

BLOTUS gives Kim a pass on this - at the expense of the family of this kid - to broker a deal he didn't even get?

Or is he cozying up to him for free Dictator Lessons?