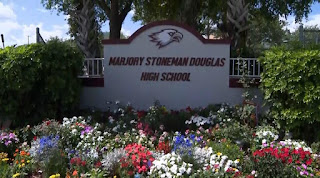 Two Parkland suicides within a week. And an additional one from the father of a Sandy Hook student.

Parkland has kind of broke the barriers on so many aspects of a mass shooting. Almost never has their been a student response like the one they had. Never have they been so outspoken, so visible. They've taken a tragedy and made it a teachable moment.  Moments.

The reality is, the tragedy doesn't stop with the funerals and the reopening of the school doors - though with drop in coverage, many would think that is where it ends. Trauma lasts for years, decades or a lifetime. I think this is pretty evident in the last few days.

I don't really know how people get over these kind of events. Right now, it is clear that some do not, if any of them do.

It is hard to quantify the cost of these events. There are direct and indirect costs - the latter harder to actualize.  There is the amount of money and time on therapy. There is just the time off of work / school and the downstream loss of revenue from that - and all that entails.

I think the most distressing thing about these suicides is - after all said and done - they were carried out with the item that affected their lives so much prior to this:  a gun.

As the country (read: government) is unwilling to do anything to stop mass shootings - of kids or adults - this is a cycle that will go on.  And on.

It seems the next step is to educate, educated, educate after these shootings. While I don't think any of the survivors and families want to live their lives in the media, the second someone stops broadcasting, most of us stop remembering and stop helping.

The GOP might be unable to really pull off trickle-down economics, but they certainly have a huge success rate of trickle-down murder / suicide.

I'd like to think that the prompt and appropriate recent reaction of the NZ Prime Minister utterly shamed the NRA and BLOTUS & Co, but I fear that it's just wishful thinking. For them, if it registered at all, her action was of mere 'nuisance' value.

We need to break the grip of the NRA on Congress, by creating a voting block even larger and stronger.

A friend's son is a student at Parkland, sheltering in a classroom while friends died in the room next door. When I read the headlines, I check the names, grateful that his family has avoided another tragedy, so far.