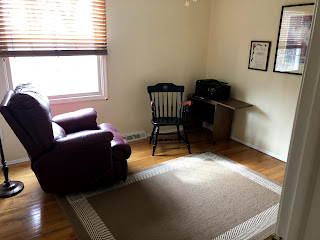 I spent yesterday cleaning out parts of my mother's house.

Before my mother went into independent living, she had been dutifully tossing things. That is a huge thing for anyone in their elder years. I usually feel the cling onto things. My mother was preparing for her downsizing.

Even with that pre-work, I think we filled about 25 black garbage bags of stuff from drawers and closets.

We also rearranged some the furniture my mother did not take to her new place, so it looks good better when they, the realtors, come to photograph it on Monday.

The house goes on the market next week, I believe. We have it priced well - and I would expect it to sell fairly quickly. It has a great view, in which no one can build behind them, so that's a plus.

What you see here in the title image is "my room".

Being the only boy, I did get my own. Mind you, I basically moved out in 1981, hence the quotes. Years later, it would become my father's office and remained so until his death.

All yesterday, my sister would identify it as "dad's office" and I would call it "my room".

As it would turn out, whatever we didn't throw out, we kept in drawers for later distribution - or later potential thrown out. But for now, the house is sellable and decluttered.

Anyone wanna buy a house?

I hope a sale comes (hee hee) quickly for you and your family. love the hard wood (hee hee) floors!