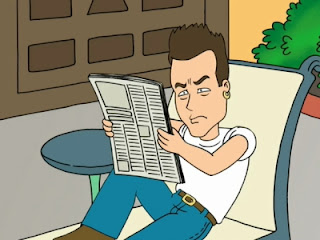 Luke Perry might have been popular on 90210, but let's face it, he didn't "make it" until he appeared as himself on Family Guy.

Yesterday, I was working off-site, and took residence up in one of the 1,497 cubes that existed on this one floor.

When he died - or news of came out - there was chatter.  Light chatter.  Maybe it was the demographics of the workplace.  Maybe no one knew who he was.  Or cared who he was. Or cared. Period.

It was 90210, not high art. I keep reading he was in OZ. I probably saw him. Did he die? Did he have sex with Christopher Meloni?  I'm guessing not - as I think that I'd remember.

For the record, while I think having a stroke at any age, let alone 52, sucks, I can't say I feel a thing for this passing. He was never on my radar, nor did I particularly think he was handsome.

I hear he is, well was, on Riverdale - as show I've never seen nor care to, it would seem. Every Ian Zering (sp?) did five Sharknados. Tori Spelling - she's doing the Poorhouse right now. It's super reality (no TV).  Andrea?  I'm assuming she's in an old age home, since she was seemingly a 46 year old high school junior in the show.

Oddly, there was talk the other day of a 90210 reboot. Two who were not invited or declined or were in limbo were Perry and Shannen Dorehty (I'm sure I'm spelling that wrong, but can't be bothered to look it up).

Honest to g-d, my first thought when he died was:  what some lengths people will go to so they aren't forced into a reboot of a 90's high school dramedy.

I still think being in Heathers gave Dorehty (I'm still pretty sure I'm spelling that incorrectly) way more street cred to me.

“I’m going to be linked with (Dylan) until I die", said Perry at one point.

He better hope it's after too - or no one is gonna remember him.

don't know, don't care. not part of my frame of tv reference. peter tork, yes. this guy, no.

I remember chatting with him briefly while in line at a 7-11 on La Cienaga in LA in 1992. No recollection of the actual topic of our conversation. We were both buying cigarettes. Smaller than I imagined..but aren't most actors?

He was born in the same hospital as me, and delivered by Sherrod Brown's father. And he was nekkid in Oz!

Why be so harsh, the man has just died, from the people who knew him he seems a pretty decent bloke.

I watched 90210 until I realized that it was going to be another uninteresting soap opera. I hate those. I never understood the attraction to Luke Perry myself. Physically, I mean. I used to wonder how many pencils he could fit in those forehead furrows. He was a reasonably good actor though and I hear a good human being.

By the way, from what I hear, Shannen's last name is spelled B*I*T*C*H.

I gave up on the show. His character reminded me of The Fonz. But I did like him. I was sorry to hear he died.
JP