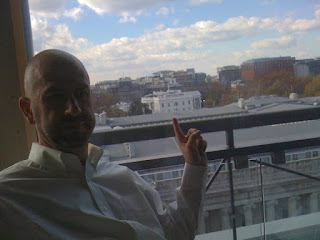 I love how "they" can't just have one item for this year. Bronze or pottery. They are pretty much mutually exclusive, unless you come in third at the state fair pottery making contest.

Technically, the anniversary was yesterday. But I know how you all get up in arms if there is no Sophie or Shep. And then there'd be pitchforks and torches......and what the hell people, I don't even live in Charlottesville!

We are celebrating, but more on that in another post.

Eight years is nothing to sneeze at - nor is almost 34. Truth be told, I'm amazed the man has stuck around this long. Granted for the last seven or so, it's been for Petey or Shep. Without either, I wouldn't have a prayer in the world.

I kid of course.

No one is getting bronze or pottery today.  I'm happy with a good meal and a bottle of wine.

(the image today is from our 'reception' after the wedding. I couldn't imagine taking that pic with the current administration being in that residence.)

Happy anniversary! Of course I did not recognize the song title, so the first thing I did was look down to the bottom to see who sang it. Oh boy.

Many congrats to both on your anni, B.
I'll have been along with everyone else trying to come up with a song which refers to pottery or bronze but, alas, no luck here. However, when they come round, silver, ruby and golden should be easier. Then there's diamond....... :-)

Happy Anniversary - I hope London is living up to expectations.
JP x

8 years already? mazel tov! may you and 710 have many more anniversaries to celebrate!

Happy anniversary! 34 years and 10 months is quite the accomplishment, even if adorable pets are part of the incentive. ;-)