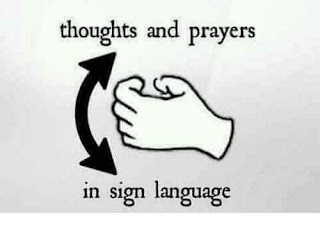 Once again, I cannot and will not, delve into the who, why, what, where crap of the last / latest mass shooting.

I am sure my faithful readers can tell me who, if anyone, was sending "thoughts and prayers".  I'm sure you can relay the borderline vile thing the NRA has said.

There is nothing new under that propaganda sun.

Mental illness aside, there is no good reason to shoot up a room full of people, unless one certain BLOTUS was in said room.

Sorry - collateral damage. It's for the greater good, and all. If a certain press secretary happened to be in the room, well, so be it.

Oh calm your tits, Secret Service.  I don't have the energy to take that on myself, but I wouldn't be crying is someone else did.  g-d it must suck to have part of your job description being to take a bullet for that fat-ass.  They don't pay you enough. They really don't.

These acts are murder. It's "domestic" terrorism. It's somewhat preventable

The one thought I had on this atrocity was if it had happened on Monday - the day before the election. How would it have changed voting habits?  Would Ted Cruz - the NRA's biggest congressional recipient of NRA funds - would have that that extra 1.9% over Beto?  I'm thinking there'd have been a strong showing of support to not cast a ballot his way.

Seems like your last sentence can equally apply to 'guns' :-(

We don't really care because we fake our concern and then move on.

another incel white domestic terrorist. and the guvmint and the NRA will do nothing.

The saddest and most disgusting element of this is that Republicans won't even THINK of ANY kind of gun legislation. I mean, wouldn't the entire country feel OK if we enacted legislation that said no guns for convicted felons of violent crimes? No guns to people with a history of mental illness? Would there really be anyone upset about that? But unfortunately the NRA has 'bought' so many republicans that they won't even consider ANY kind of sensible gun control measures, so more innocent people are killed, and no one but the Parkland students seem to care. I'm not in the habit of wishing ill on anyone, but just once I'd like to see the child for family member of a Republican congress member be killed by a white domestic terrorist. Would that finally be "enough"?