Have You Ever Seen the Rain? 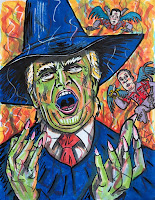 I do not want to hear one fucking word from anyone - republican or democrat (though mostly the former) - about any football play taking a knee, in regards to it being disrespectful to 'the troops'.

You have a dick knob president who got deferments, mocked a gold-star soldier and his family, has yet to visit any troops, has sent them to the border with no power or hot food, and yes - was a no-show to a Veteran's Day commemorating the 100th anniversary of the end of World War I.......................because it was raining!

Let that sink in.  Water.

This "man" has shown nothing but disrespect for the military, past or present, so spare me your faux indignation for football players not being patriotic.

BTW......I might love Emmanuel Macron, for purposefully or not, putting BLOTUS in his place regarding nationalism.  Of course it is all for naught, as BLOTUS wouldn't understand such language, nor would he care, after his sycophants got him up to speed later.

I mean, he'll care. No doubt has already tweeted about how stupid France is.

Let us not forget that the leaders of the world walked a half-mile towards the Arc de Triomphe, except for BLOTUS.  He took his motorcade, like the spoiled child he is. Millions of people who died in service, who he was there to honor, and it became all about him........like always.

I've said it before and no doubt will again, can he sink any lower?

Song by: Creedence Clearwarter Revival
Posted by Blobby at 12:05 AM

he posted 5 nasty tweets about france at 7a yesterday. and the french went to arlington cemetery in his place on monday cause...(wait for it)...it was raining. such a yellow lying coward!