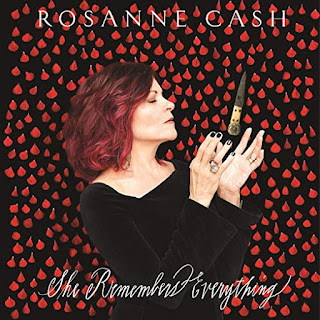 2018 has not been a great year for music - at least where I'm concerned.  If you haven't noticed, this blog theme has not been 'monthly' this year. I haven't spent a lot on music in 2018.

In general, I enjoy any release from Rosanne Cash. Sure, like any artist, some outings are better than others. In general, I get very excited by a few songs and some of them fall out where I hit 'skip'.

She Remembers Everything has some of that too.

The price of the album is almost worth it for two tracks - the opener, "The Only Thing Worth Fighting For" and "Particle and Wave".

I mentioned a month or so ago, that of the first pre-released tracks, I really liked the third, "Not Many Miles to Go".  It has a better beat and a good chorus / verse thing going on.  It remains a stand out track on this new record.

The title track, well.........I want to like it so much more. It has its moments, of course, but I expected something more when co-writing / co-performing with Sam Phillips, though the "featuring" thing - as on many Cash albums - you have to REALLY dig deep to hear some of these collaborators.

"Everyone But Me" started as a bit of a let down, but I have to say, after the last few weeks I have a much better feeling for it.  The piano work sounds like something Ken or Ric Burns would use for one of their PBS documentaries.  You're more waiting for David Ogden Steirs' narration as much as you would be a Cash vocal.

While I appreciate John Leventhal's production, now and then I like to see Cash stray from him for other perspectives. It worked well with Black Cadillac, and it works well here too. Ditto with collaborators too.

Tucker Martine, who has produced Neko Case and the Decemberists, takes the helm on about half the disk. Two of those tracks have Colin Meloy singing harmony.  As mentioned, I am loving "The Only Thing Worth Fighting For".  It has great phrasing and a Chris Isaak vibe that suits Cash and the song well.  I enjoy "Rabbit Hole" too, though it is a little repetitive.  Martine also produces the title track, and two that were written by Cash, T Bone Burnette and Lera Lynn, who all worked together on HBO's True Detective series ("Fighting For" and "My Least Favorite Life").

Leventhal certainly has his moments too - but the stand out is "Particle and Wave" which comes in at the shortest song on the disk. It's different enough to catch your ear, but truly stands on its own.

"8 Gods of Harlem" actually works, when it might not on paper. Frequent collaborators with Cash - Elvis Costello and Kris Kristofferson - sing from different perspectives (mother, brother, father) of the killing of a teen.

As for the rest of the disk, it's fine but so far not heavily memorable. I have to say, it sounds that those two or three tunes have all been done before.

She Remembers Everything is still worthy of a deep dive listen. Cash is in good voice and in good company.
Posted by Blobby at 12:06 AM

Colin Meloy, T Bone Burnett, Costello... she definitely has the all star backing, doesn't she?

Some people are pretty good even when not at their best.