Man on the Moon 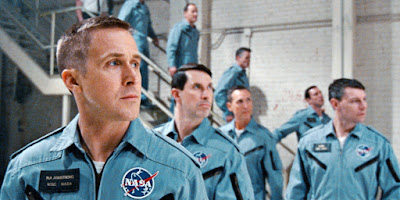 Let's just start out - if you're going to make a movie about astronauts - and they have to wear helmets a lot of the time - don't use Ryan Gosling. It's a waste of Gosling face.

Yesterday, we went to see First Man (see Raybeard, you weren't the last to see it).

The film was better than Interstellar (but what wasn't) but not as good as Gravity or the Martian.

I guess the difference is: this was real - unless you buy into the whole 'the moon landing was a hoax' conspiracy. So, it was better than Apollo 13 but not as good as the Right Stuff.

While director Damien Chazelle had some eye popping shots in his La La Land, there weren't many here. Sometimes, quite the opposite. I found many of the shots dark and visually hard to catch what was, or was supposed to be, going on.

Now and again, there was an outstanding shot - so I know Chazelle was at least trying.

I get the decorating style of the time was wood paneling, but many interior shots were so dark, they came off as depressing even when they weren't meant to be.

That said, I have zero idea of how Neil and Janet's actual relationship was, but 'warm' isn't the way you'd describe it from this portrayal. I get they had early tragedy in their marriage, but I had a hard time caring about anything Claire Foy was trying to project in the way of 'concern'.

I totally get the 'stoicism' of the era and the profession, but there is so little emoting from Gosling, save for one or two scenes, it just played as flat.

Like Raybeard, I enjoy a good training scene and how a launch gets operationalized, but they had more of it, and better, in the Right Stuff.  I thought the Apollo 1 tragedy was both a harrowing scene and yet extremely well done.

Oh - and Kyle Chandler is in it, so he never sucks to look at for any period of time.

First Man was ok, but there's a reason it's been out a month and only playing at limited theaters and at odd times (3p or 9p).  Like La La Land, it is not going home with best picture. Or actor.

Thanks for the 'shouts' B. (No less than TWO of them!)
I'm largely with you on how this one rates against more recent-ish space-themed films, though one of my most deeply ingrained memories of it is going to be, unfortunately, the prevailing sourpuss mood of Claire Foy even if we can appreciate why the character would feel that way. I'd only watch it again if somehow her scenes could be snipped out, and then I definitely would.
I can see why you thought Ryan G.'s performance was so emotionally reined-in but I can also see how it was valid for what Armstrong was going through when, after he was chosen, it was starting to look as a sort of 'vanity' venture for him, especially the way his wife saw it, and he was getting guilt feelings about the whole business anyway.
On the whole your observations are, if I dare say it myself, reasonable ones.

Isn't anyone else going to comment on your observations? Sad! ;-)