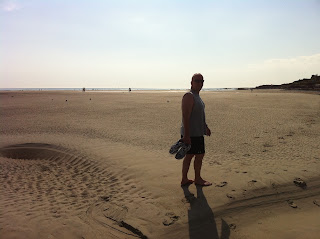 ....and I've done next to nothing.  I could make dinner and dessert, but chances are we'll just go out to dinner on the weekend instead. It will be a typical Thursday at Chez Blob.  ...and that's ok.

There will be a present, but a small one. ...and it might not arrive on time. It's is currently tracked to Columbus - well, at 13:41 yesterday. If it's moved, no one at UPS has updated their system.

The renovation was our presents - for the next 12 years, so he isn't really expecting anything - unless he reads this instead of the morning paper (which he won't).

Of course the big present is me. I mean, why wouldn't it be?

I was thinking, yesterday, in the new shower, that while I won't tell you how old he is, that in his entire lifetime, he has spent more birthdays with me than without. That is kind of semi-incredible fact....at least to me.

On another birthday note, my oldest niece turned 21 two days ago? How'd that happen? Wasn't it just a few years ago I held her after she came home from the hospital?  Didn't I just attend her first birthday party - seen here? 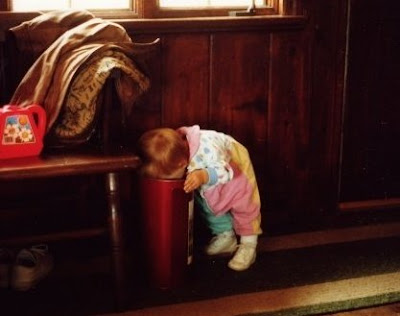 She didn't have a rough b-day and ralph in the trash can - she just dropped some stuffed animal in there.
Where has the time gone? Whether it be my time with 710 or having my niece become legal.

Katie will get a nicer gift than 710. We'll get her a Amex gift card she can take to Italy. Oh yes, she's going to Italy and Croatia after school is out next month. I'll want her to have a good time and a little money she can use for fun.

Song by: Patsy Cline
Posted by Blobby at 6:27 AM

The gift that keeps on giving. Happy Birthday 710!

happy birthday to blobby's other half! and you are lucky to have each other!

Does that make him 7-11? My favorite convenience store.

You finally give him a piece of ass?

Happy (belated) escape from the womb remembrance day to 710!