For some, an impulse item is that pack of Freedent at the cashier counter when you're at the grocery store.

To others, I suppose it's a Corrine Bailey Rae CD at Starbucks when they get their daily half-caf, soy-light, double something or other. ....I don't drink coffee.....can you tell?

....if I could only get off that cheaply.

At the end of last year, when I went to pick out my new glasses, I had it narrowed down to two frames - the ones I got, and the ones I think I really wanted. I like the ones I chose, but honestly, this is the look I was going for. 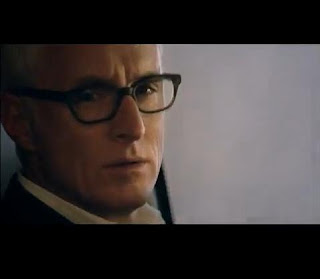 You know how I say that ads never influence me to buy anything? I lied. Granted, I wasn't buying the car that was what they were selling, I wanted the glasses that John Slattery was wearing in the ad for said automobile.

If internet searches are to be believed - and we all know there are no lies on the web - the frames are from Tom Ford. Mr. Ford can be kind of nice to look at from time to time, but he seems way too full of himself and he just comes across as a twat. And while the frames are not sold in Cleveland, I doubt I'd pay whatever the marked up cost was, even if they were.

So I got what I chose and moved on. Kind of.

The other pair I was John Kerry'ing over, I just couldn't get them out of my mind. So when I went to pick up the pair I actually ordered, I tried on the frames again - and that was my impulse item.

I opted to get them. The frames were actually quite reasonable - it's my lenses that drive up the costs. I'm kind of / sort of blind. I have to get the special poly-carbonate lens or the pressure of the two tons of glass would break the bridge of my nose. Yes, I'm that blind.

In the back of my mind, I kept hearing something my cousin David (yes, him again. He makes a lot of appearances here, doesn't he?) said at lunch the other day about him being Mr. Magoo and I was thinking 'no, that's me.'

I think this could prove my point. 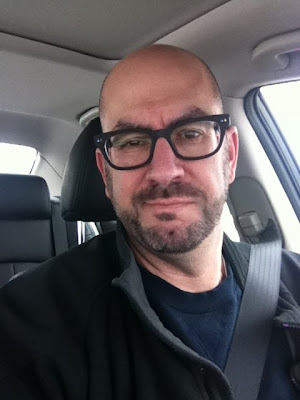 So I went home with my first pair and I kind of / sort of might have forgotten to mention to the husband that I plunked down some additional cash for yet another pair of glasses. Or as he pointed out the other day, to friends, I might have a few too many pairs already when he called me "Imelda".

So what? Now I have a pair of glasses for every day of the week. Big whoop. To be fair, two of those pair are only single vision and I can't wear them if I have to read anything.....so........there!

Actually, Denton does not begrudge me this luxury at all. I was just teasing, though he did call me "Imelda". And I know I won't buy any new pairs for at least two years now. I'm solid.

Yeah, it's a slightly geek(ier) look - even for me. I think the reason I opted not to get them in the first place was they are almost a bit casual for client meetings. So now I just won't wear them to those meetings.

But I did find out that I don't look as much like Mr. Magoo as I thought. Nor Mr. Slattery. Nope.

I think this is closer to the mark. 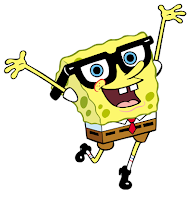 Blobby: I think they make you look intense. Good look.

Got the wrong cartoon. Not Mr. Magoo, Mr. Peabody.

I dig those shades. A. Lot. But you see, you're the kind of handsome man that can get by with wearing them. I'd look like a dork.

I like the first pair better on you. but what do I know?

They seem to be carbon intense.
Eyewear,you've got that covered!

Good choice.
I too am trading in the first set and going for more subdued.

Sorry, I'm with Anne Marie, I liked the first pair a lot. But a change once in a while is a good thing!

Perhaps Lasik with your HSA this year.

I like them. Then again, I usually go for the unusual specs anyway.