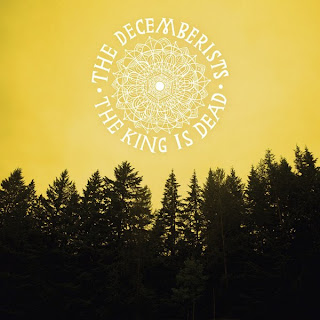 Finally, new music I want to get my head around. The Decemberists have a new disk out, The King is Dead.

While I've liked the band over the last half-decade or so, I can't say I was a huge fan. An entire disk would grate on my nerves, but certain songs I just really really liked: "Engine Driver", "We Both Go Down Together", "The Perfect Crime" and "Here I Dreamt I was an Architect".

But I have to say, the release of the first single from tKiD, "Down by the Water" just really grabbed me - and I was eagerly hearing what else would be on the record when it was released late last year. I even picked it as one of the top songs of 2010.

I don't think my affection for the song had anything to do with the fact that Gillian Welch sings harmony on it. I didn't even know she, and her partner, David Rawlins, would appear on most of their album either. I love Gillian - though clearly an acquired taste, she is.

Normally harmonica would drive me up a wall, since most cannot use it effectively. That does not happen with this song. The harmonica gives the song a definite Neil Young vibe. ...which is good, if you like Young - and I do.

R.E.M.'s Peter Buck also shows up on a few tracks as well. And while clearly a good guitarist, he pretty much plagiarizes himself on "The Calamity Song". His guitar work sounds exactly like "Talk About the Passion".

Nothing against the majority of the band, but the songs are written and sung by Colin Meloy. Like the rest of their disks, normally this could get tiring and run the risk of repetition as you go through the disk. Yeah, this album has some of those spots, but it dodges them for the most part.

"This is Why We Fight" has really grown on me.

"Dear Avery" is a nice closer. Starting very stripped down, it slowly builds during it's five minutes and has some nice backing vocals that fit and seem out of place at the same time.

Overall, the band has put together a cohesive album that don't go too too deep into the storytelling realm they are used to. While that is what set them apart, for me it got a little old.

The band is talented, Meloy is a great songwriter. I like the slightly stripped down version of the band - the more acoustic (but not totally acoustic) approach. It's a really good album, but I'd stop short saying it was a great one.
Posted by Blobby at 6:36 AM

I always appreciate these sort of posts.
#1 - you share your passion, which is a treat
#2 - I get to hear about music I never would have heard.