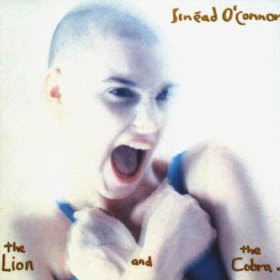 What can I say - the Lion and the Cobra is a great debut album.....albeit the cover art is slightly different now than when it was released back in 1987.

Sinéad O'Connor was almost at the top of her game from the word 'go', being all of 21 years old when it came out, but the music spoke of a woman with a century of life experience. Maybe I'm just making that comparison due to the opening number "Jackie".

The song plays out like a play from the 19th century of a widow's tale about her husband lost at sea. It starts so softly and demure and just builds and builds, showing what control and strength O'Connor has in her voice.

It is not coincidence the next track goes right into a much more modern rock track of "Mandinka". With her voice dipping and peaking, she was immediately compared to Kate Bush - a thing she disliked, as I saw once. She said she had more in common with Elton John. Eeek.

Still it's a great song and was the first song I heard and saw from her (thank you '120 Minutes' on MTV).

My friend, Jon, who never remembers this story, but at a co-worker's re-wedding (eat, drink and remarry) we may have gotten drunk and I went out to my car and got a cassette (yes, a cassette!) and hijacked the reception music. We played "I Want Your (Hands on Me)" and danced together. We were the only ones dancing - I'm sure to stares, as two men danced to music others had never heard or would ever hear again.

All the songs are strong and to this day I love playing the entire disk start to finish. O'Connor's music, lyrics and voice are seemingly erratic, but when you listen to it, they are all extremely controlled. She is an artist who knows exactly what she is doing ("Drink Before the War", "Just Like U Said it Would B").

I really love "Just Like U Said it Would Be", but the stand out cut of the disk is "Troy". It is like a piece of art and truly the centerpiece of the disk. The vocals are so outstanding in terms of softness and strength, of love and defiance. I've listened to this song more than any other on the disk and it never gets old. Ever.

That all said, it's not a perfect album - not for me. I skip over two songs - "Never Get Old" and "Just Call Me Joe". They don't gel for me and while in some respects they keep in the spirit of the album, in other ways it breaks the flow. I don't think it is surprising that both these songs closed sides 1 and 2 of the vinyl version.

Yeah, I know most people know O'Connor from the SNL/Pope thing, but don't let that taint (hehehe......I said 'taint') your view of a great singer-songwriter. 24 years later and I'm still wow'd by this disk.
Posted by Blobby at 5:51 AM

God..remember seeing the video debut of Mandinka whilst at FG's apartment? We were stunned! It was SOOOOOOO cool for the times. It's still one of my fave albums, too. And you're right: no recollection of dancing at that wedding, but I love the story.

After a year of reading your reviews Mr Magoo I think the glasses are very Tom Ford on your Ron Burgundy brain. Ron Burgundy: I'm gonna punch you in the ovary, that's what I'm gonna do. A straight shot. Right to the babymaker.

I have one of Ms O'Connor's albums; and I enjoy her.
I also have her singing "Some day my prince will come" from Snow White; which is a nice bit of ironic humor.

LOVE. And still love, too. ON my vantunes!