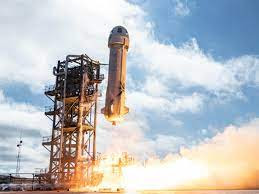 As interested as I am in space, I could not be less interested in Richard Branson or Jeff Bezos going there.

Truth be told - and yes, I'm a HORRIBLE human being (tell me something I don't know) - I didn't care if either of them made it back from their journeys.

Elon Musk is a douche for sure, but he hasn't quite made it all about him when it comes to Space X.

And Bezos giving $200,000,000 to two people to do with it what they want?  What kind of fucking dick passive-aggressive move is that?  So if Van Jones doesn't use it to feed every needy school kid in the U.S., somehow now it's his fault as opposed to Bezos, who could have just provided food to every needy family in the country along with adequate housing.

I'd kill for Jones to use that money to fund the unionization of amazon workers.

But since Bezos can clearly afford anything he fucking wants and it's his ride (!!) - what was the point of auctioning off a seat in his rocket for twenty something million dollars?  Fuck - take an underprivileged kid who can only dream of going to space. Take a girl who wants to be in a STEM program. Do fucking something that isn't for the greenback dollar.  Do something that shows you're not a complete douche.

Bezos did none of that - except the douche thing. He's got that down cold.

.....and whomever designed his rocket has a major inferiority complex. .....and is quite possibly Jewish.

Song by: the Cars

A circumcised rocket, it is very phallic. I thought what he did yesterday seemed more like a carnival ride , one that as a child I would not have chosen at Disney.

The launch of the Phallus - to show that space is a 'MAN' thing?