57 Channels (and Nothing's On)

So........back to TV shows.  Though even all our movies watching at home just seems like tv shows anymore.
We went past our local art house movie theater the other day and the parking lots was packed!  I'm not in that place where I feel the need to go back to the movies. Maybe one day.
But for a trial run, we subscribed to the Peacock. Lord knows it wasn't for endless access to Friends. I don't think I need to the Office start to finish for the 10th time either. I am always down to watch and rewatch Parks & Rec though.
Yet, friend, Becky, teased me into seeing what she called Tina Fey's new show, Girls5Eva. 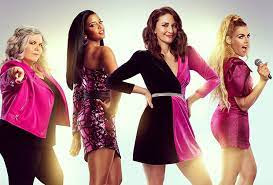 .....because 4-ever's too short.  not enough.
Becky said you can sign up for Peacock for free but with commercials.  She LIED.
I mean, she did and she didn't. Of course you can sign-up for free, but.......at least with this show, you can see three episodes and then have to pay.  Trickery.
And it's only kind of a Tina Fey show. She produced it, but she is not the creator, she is not the writer. Yet there is a flow to it and some cast members that she has used throughout the years and her various series. Even Sara Bareilles invokes some Fey mannerisms (see the above pic even).
Bareilles, whose music for which I do not care, also starred on Broadway in a play derived from the movie Waitress - which proves you can make anything into a Broadway show. But here, she doesn't suck. None of the characters do.
Since it's pseudo-network tv, you are not allowed to have two (or too many) minorities as the viewing public seemingly gets confused easily, so early on they kill off the Asian girl. So there were 5, now 4 - and I don't think the show gets that irony.
The premise is a one-hit wonder girl group from the 90s gets a slight chance for a comeback, 20 odd years later.
All of the cast works - but c'mon, Paula Pell is priceless!!!!  I cannot state that enough.  Renée Elise Goldsberry doesn't take herself seriously (take that Hamilton!).  Love love love Busy Phillips, but she's getting a bit typecast as "the ditzy one".
The show is well written, and it made us laugh a number of times. I mean, sure, you had to endure seeing and hearing Jimmy Fallon, but if you cover your ears, half the problem goes away.
We've only seen one episode and we'll watch the other two to see if it is worth putting a crowbar in our wallet to finish the season.
If you have Peacock, then by all means check it out. You shan't regret it..........I don't think.
Song by: Bruce Springsteen
Posted by Blobby at 12:07 AM