We've been in our "new" house about 14 months.  Instead of making some immediate changes - not there is much we need or want to do (which was part of the move impetus), some yard work needed to be done.
The front yard was mostly cosmetic, as things had gotten wild, even before we moved in. The previous owners started divorce proceedings and moved out about 6 mos before we bought the house. Grass was taken care of......and that's about it.
The back yard is another story. The big storm of 2019 did some semi-major damage to the property when a big-assed tree came down (crushing the fence and at least one of the neighbor's cars). The previous owners fixed the fence and got rid of most of the tree, but some of the base and roots remain. Mainly the earth and yard was upturned and never fixed.
There are also drainage issues.  And parts that are overgrown.
That starts getting fixed next week.
We knew it had to be done and it's not cheap (I haven't axed 710 for the amount - as I don't think I want to know). But we contacted a number of companies for estimates and quotes. Some came out, but never provided quotes. Some just never came out after making the appointment. Some never bothered to even call back to set something up. 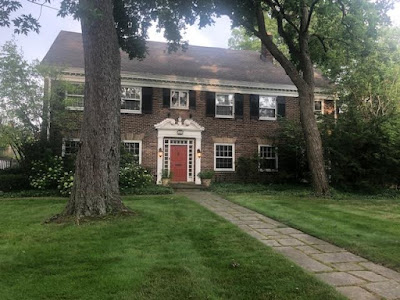 Before
The bush on the right is HUGE. The hydrangeas on the left (blocked by the tree) were out of control too. 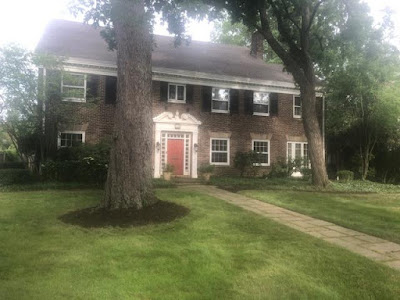 After
The house looks way bigger. The mulching around the trees is nice.
'Tis the backyard for which I am truly waiting. I'm sure there will be that update too, but maybe in pieces.  While it's not a huge yard, after the drainage, digging, cleaning up and new plantings, the grass will have to grow back.  Full effects in before / after might take a while.
Song by: Tracy Chapman
Posted by Blobby at 8:57 PM

Your house is very beautiful with great curb appeal. With those two trees the additional front exposure is wonderful. Keep trimming, I can see why you moved, good luck with the back .

Very classic Heights, and no cars crashing into your trees anymore.

Stone me! If that's all yours in this country we're talking AT LEAST £3/4 mill [= I mill $ American]. Perhaps that's what you intended it to look like, that being what it cost. It looks practically like a mansion! Abd surrounded with plenty of sniffing territory for Shep - and hunting ground for Sophie [if only she wasn't such a home-loving pussy].