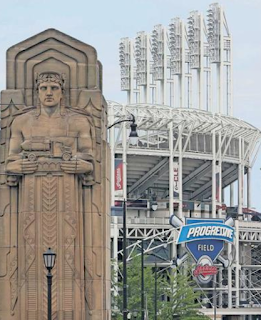 David from Adventures of aTravel Penguin axed me yesterday (in a comment) my thoughts on the name change for the so-called local sports team.  .....and then Cookie over at Doing Hard Times in Shaker Heights beat me to the punch.
Much like a Cleveland sports team, I just can't win!
As for naming rights, I was hopeful, and I was not denied. This would be a first for me and a Cleveland baseball team.  .....as they have denied me so very very often.
The Cleveland Indians have a new name.  The Guardians.
No. NOT of the Galaxy. Named for - or with homage to - the Guardians of Traffic sculptures on the Lorain-Carnegie Hope Memorial Bridge.
It's true that bridge connects Carnegie Ave and Lorain Ave, but the Hope is for Bob Hope's (yes, THAT Bob Hope) father, who was the craftsman for the sculptures.
A number of team names were bandied about: Spiders. Rockers. Crows (why?). And those were the good ones. I assumed / hoped (pun!) that it would be the Guardians, as the bridge leads right to the baseball stadium. ....and I'm always amazed at them.
I won't lie - my whole life it's been the Indians. There is a sadness in seeing that go, but I get it too. Chief Wahoo is hardly how I think of Native Americans, but I'm not one of them, so I can't say how they feel. I suppose it is like some straight person thinking it's ok to call me a 'faggot'.
So move one me must. And should. And honestly, thank you George Floyd.
After decades of opening days with Native Americans protesting at Municipal Stadium or Jacob's Field, the front office was not swayed to make a change. Only with Floyd's death and the subsequent protests that turned out not to just be about Black Lives Matter, but the many tentacles of racial misappropriations that Cleveland and the Washington Football Team got the appropriate pressure to move forward.
It must kill Derek Chauvin that with is murder of Floyd, sparked changes in this country that he never wanted to see come to fruition ever and might never have come if not for him. But I will not thank Chauvin for that. However, enough of the American people - not the Karen's or Chad's of the world - got movement behind all of this.
So, next season, we will be the Guardians. I just have to believe if what I'm guessing was the 17 years old they got to create the new logo had just taken an extra 20 minutes, it would have been a better design. 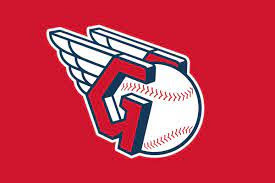 Song by: Alanis Morissette
Posted by Blobby at 12:07 AM

Change is always sad to some extent, hope it makes more people happy than the ones it makes angry. Yes we should always do the right thing.

It was past time for change, I am glad to hear the locals like the name, and the reasoning behind it. That is a nice bridge, we LOVE the Westside market.

Fear not - your Indians are still there, hidden in the new name: All the CAP'd letters will conjure up INDIANS (guarDIANS). Just use the I & N twice. I saw that at once. Interesting, no?

I did not know there was that much a back story to the name change. It is a good change and a great story. Although we are still trying to figure out what exactly a Phillie is after 140 years.