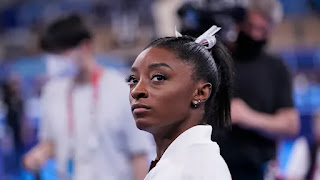 Good for Simone.  And good for her sponsors - most of them.

Simone Biles was smart enough, and strong enough to know when was when. At least a day at a time.

While she claims no physical injury, she's trying to avoid one from what has to be a completely unnerving situation.

How many times can you hear that over and over and not let it effect you?  No one is equipped to handle such pressure time and again. It's not even the eye of the world on you - it's worse.  It's the most asshole-ish U.S. audience who thrives on the build up and inevitable tear down.

The media has gotten it all right and all wrong.

Local news coverage, of course, tries the 'mental health' angle and saying all the 'right things'......and then the commentator ends with, in and upbeat but disappointing, "and she really the hope for ALL of team U.S.A." - basically saying, 'she let down the country'.

No wonder Biles stepped away. She should have ran.

All but one of her sponsors supports her choices. United Airlines - at least of this writing - is the only one not to say a word. They're a shitty airline, so it's no surprise. At least they're consistent. None are dropping her - though.........shitty United, so......who knows on that one.

I'm glad Biles is reassessing on a day-by-day basis. I'm glad she's strong enough not to bow the pressure of performing.

It's not like gymnastics has been a positive place for women. You know, their team doctor assaulting 300 women. The gymnastics association knew of - or allegedly knew of - and did little to nothing......even after the fact. They don't have the best interests of their members at the top of their list.

My - tights, mats and a rapey team doctor?  Did Jim Jordan work for the U.S. Gymnastics Association?

Yeah - Simone should have run away.

I feel bad for anyone trying to perform in a Covid filled Olympics, much less someone who is mentally stressed and off their game. Hopefully if they choose She and Naomi Osaka can find their way.

For NBC Universal(?) and the TV audience it is entertainment. For Ms Beiles, it is her life, her health, and well being. I cannot even begin to imagine what she is living through that lead her to this place. Somebody has to be the grown up in the room and, when appropriate, say "No, not now." Thankfully, she is that person. Do you imagine perhaps, that there may be some people who resent a talented young black woman with agency who disrupted their entertainment?