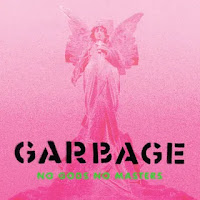 First off, for the most part, I love Garbage. Maybe now, I like the idea of them more.

They're last album, Strange Little Birds, was kind of a clunker, yet I pre-ordered No G-d No Master without hesitation. I really probably shouldn't do that anymore, with any album, as so often it kind of comes to bite me in the ass.

I'll start off with that Garbage is still a very talented band, and Shirley Manson is a great vocalist. The musical skills are good. Better than good.

"Dark" is the adjective for which I use for this disk - in sound and tone; in music and lyrics.  It's not that the band has been sweetness and light, and granted the time between disks saw some troubling times - political (BLOTUS), social (#metoo).  As much of it was recorded before Covid, that doesn't quite play into it, but you get it.

Garbage was always good a balancing the dark mood with some hooks, and that happens here, but far too infrequently. There are a few songs I like - or came around to like - "Creeps", "No Horses", "Flipping the Bird", "Waiting for G-d".  But the rest are kind of a drag.

As I am apt to do, I went and got myself the DEE-Luxe version. It has some stand alone songs that Garbage had put out since 2013 including a few covers - a slightly uninspired "Starman" and "Because the Night", which I featured back in 2013.

I'm sure I'll come back to No G-d No Master, but not for full-through listens. I'll be selective.