Man - I was three quarters of a way through my draft of another post only to find out the item was real, but like two years old, so I scrapped it.  I had nothing else really.  Work has really gotten in the way of blogging.

But my sister sent me this: 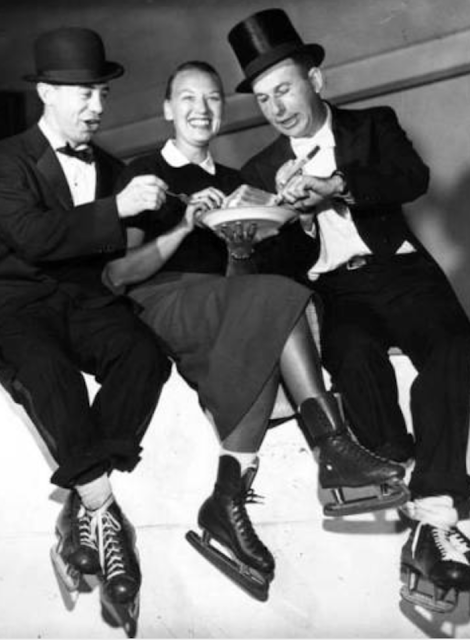 The guy on the right is, well....was, my uncle. He died 10 days after I was born, so I don't really remember much about him.  {the eye roll is implied}

Skating was the thing in the 50s in Cleveland. That's where my parents met. Until a few years ago, they'd have a party with their skating club every year. I'm not sure anyone but my mother and aunt (Ernie's and my father's sister) are still alive.   If they are, it's doubtful they can drive after dark.

For those who knew my father - and Jon, Morty, Becky and Dith might be the only ones here - I'd normally say Ernie doesn't bare a resemblance to him, but this picture tells me otherwise. Maybe it's the angle.

Ernie died at 41 and was a confirmed bachelor. I don't know if he was gay or not - and it wasn't a question I really could ask my father. He and Ernie were tight. And even though the second born, was seemingly their parent's favourite.

Ernie wasn't buried in the family plot for some reason, and it was enough for his mother not to be too, as she is laid to rest next to him. I found that weird.

One story I have heard is that he'd hide tape recorders in people's houses and then listen to what they had to say.  Ick.

Maybe he's not buried with the family by his choice.

I didn't ask all the questions about Ernie when people were alive. Both his brothers are now dead, with only a sister left, and that's not a person I want to go to for verification of anything anyways. And it's her long dead brother. Doubtful she'd say anything unflattering. I'm not sure I'd get biased stories from my mother.

TBH, I thought the guy on the right was a young mel brooks. who are the other two people?

I thought the guy on the right was Edgar Bergen, and the other dude was George Raft. It does look like a still from an old movie. If I stare hard enough, I can see u in his face. Weird how that happens.

the little known reality about Jewish men - they ALL end up looking like Mel Brooks.