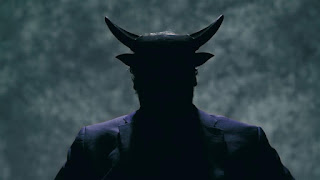 So last night, before more tequila, we went to go see Hail Satan.

Hail Satan is a documentary.

The movie has its pros and cons. While yes, it does deal with the Satanic Temple, it turns out modern day Satan worship is not really about well......worshipping the devil.

Their views on government, theocracy (or lack thereof), equality, etc are very enlightened. They use their beliefs to counter the entire construct that the U.S. was not built as a Christian Nation.

They fall through on this endeavour by their name itself: Satanic Temple. And following up most things with chanting "Hail Satan".

No one interviewed seems to really think they're worshipping the devil or evil. None of them seem to be. At least in this slice of their lives, they're challenging state governments about their lack of separating of church and state by pointing out the only prayers they say are christian ones and the presence of 10 Commandments on state property - but only the 10 Commandments.

Most of the people are exactly what you think:  black wearing, metal heads with lots of piercings and ink. Save one Alabama, bow-tie wearing guy who reminded me of Kenneth on 30 Rock.  That all kind of takes away from their goals. Let's face it - people have a hard time looking past the black leather and chanting like you're worshipping the devil.

While I'm not moving to the Satanic Temple anytime soon, they operate by Seven Tenets.  They'd be hard for anyone - even a Christian (save #3 these days) - to find fault with them.

Again, their message is lost in the wrapping.

It was an interesting movie, though it made me cringe here and there.

Apparently they are going to challenge the recent draconian abortion laws on the grounds it violates their religion. This ought to be good.