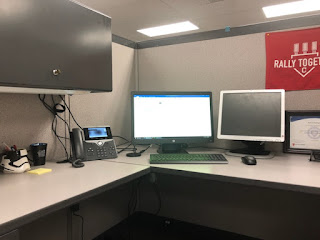 One month and one day into my job, I finally have an "office".

The building I moved to, well, I don't have an office yet. That will probably be 3-6 months before I get one.  No worries.

At my last job, before they had us work from home, I had a cube and it was fine. It was fine because people traveled a lot, myself included.

Now I have people near me on the phone constantly - though it is part of their job.

Wireless bluetooth earbuds are going to be my new bestest friend. I also have a pair of noise cancelling headphones (also bluetooth) that might come into play. I've seen others in the work area with them and I'm totally getting it.

I have an Indians towel hanging and a storm trooper mug (which I use as a pen holder thingy) and that's about it.  And a half pack of post-its.  Right now, and as is my plan: no paper.

ew, a CUBE FARM! they should have had a private office waiting for you upon arrival.