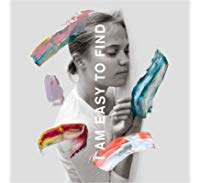 I was looking forward to the new albums by the National, not so much because it's theirs, but because 2019 has been so-so on any new music. I wanted something good.

I'm Easy to Find is good-ish, but what it is not is a National album.  They can call it what they want, but it's a side project, a vanity project.....or both.

I first played the disk in my car, but you know, it's driving so there are other distractions. There wasn't 100% engagement on my part. I wasn't aware there'd be other singers on the disk, let alone female. Females. Plural.

In the car, and maybe because I was thrown, all I heard was a female vocal. Now it wasn't driving that was distracting me, but not really hearing Matt Berninger's baritone. Things looked up a bit when listening in my office with a pair of earbuds, there is a lot more of which to listen.

I liked Lisa Hannigan's work with Damien Rice, but couldn't get into her solo stuff. Here, I have a difficult time distinguishing her vocals from the other female vocalists here.

Just because a record is different doesn't make it better. I'm all for having talent expand or opening up new windows, but when you bring in 3-4 additional vocalists and {gulp} a boy's choir (awful.....just awful) you're not just changing the dynamics of the band, your challenging it to where could they go from here........or should they.

There are, of course, some really good moments, some more experimental ones. You're the National, not Leonard Cohen, you can cease with the spoken word portion. And of course, the bad - again, boy's choir.