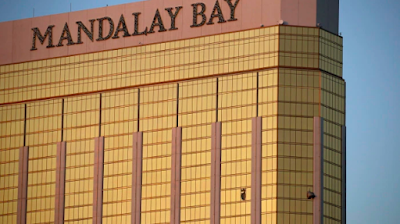 Over a year ago, when I wrote about the massacre at Pulse, I mentioned that it was, and I quote....

It kept coming back to: "the worst mass shooting in U.S. history".THE worst.....for now.


Even Bob reflected on that line in his comment at the time.

Articles - the few of which I've read - talk about the shooters 'troubled past'.  You never hear them saying that about Ahmed after he's strapped a bomb to himself in the local pizza parlour. Oddly, Ahmed rarely injures or kills 600 people at a time.

Ahmed also rarely has an assault rifle.....sorry.....rifles...plural.....that are so easily accessible here in the US of A.  Thank you NRA.

Oh, I could go on about the NRA....again. They are right. Assault rifles are great for hunting..............people! Lots and lots of people...and our well armed militias!

Becky pointed out to me: it was a country music festival, shouldn't any number of attendees been packing heat?  I countered with - well, the guy was 32 stories up and probably didn't see him. Then mentioned that they just couldn't shoot up at a building as you know they don't have any aim. They'd be killing folks on the 18th through 43rd floor as they just fired indiscriminately.

She seemed to think that wouldn't be an issue with so many gun-owners. "Who would care?" she came back with.  She's right.

They'd all get praise from the NRA as being the "good guys with a gun".......Mr & Mrs Sullivan in 2308 were just collateral damage for the right to own a firearm while they watched an episode of the Big Bang Theory before heading down to play Keno.

I have to say, for me, it's getting harder and harder to feel shock and awe at events like this. I'm finding I have a limited amount of energy to get my dander up about something that is now the new normal.

This is a problem on multiple levels. Being desensitized is a real thing. To see such horror and things that are so vile that you just figure, "oh, that's the way it goes".  It is an attitude like that which is how we got November 8, 2016.

It doesn't help when your thoughts are actualized by the New York Times. 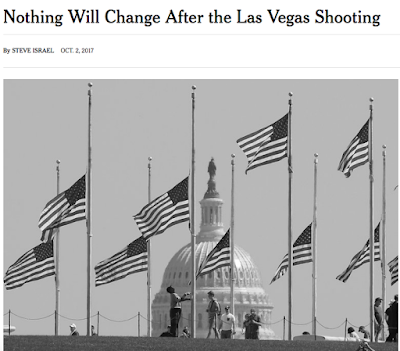 It's utterly disheartening......because it's true.  I truly believe that we as a nation are spinning our wheels on this -- and we're only like 42 years into seeing a scene like this over and over and over (though they are higher death tolls and in greater frequency). Yet, we have a do nothing system and I don't see that going anywhere in my lifetime.

Thoughts and prayers no longer cut it.....though they are still doled out in abundance in the press and social media.....and look where that's gotten any of these folks.

I expect Congress to use this distraction to pass some shitty healthcare law while everyone is talking about Las Vegas. That is how I think we as a country now operate.

Honestly, I'd love things to change, but I really don't know how that even works anymore.

I agree, it is an act of terrorism, and should be treated as such.

What sickens me almost as much as this senseless violence that we continue to allow to happen, are all those 'Thoughts and prayers' people. They can all fuck off.

I hear that the White House says that "Now is not the time to talk about gun control". (I'll leave you to supply the rest of my comment!)