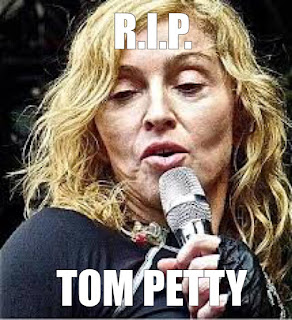 I'm going on record that none of you (or most) would have thought I was a Tom Petty "fan". But in my own certain way I was......and going all the way back to the mid-70s with his first single "Breakdown".

Don't get me wrong, I never followed him so closely that I knew when his next disk was coming out, but I owned more than my fair share, but usually just enjoyed listening to him.

Petty wasn't the best guitarist. He wasn't a looker. And he was a little mush-mouthed at times with singing - yet it all worked. He surrounded himself with great musicians (I used to have a slight crush on drummer, Stan Lynch).

But Petty was more than a songwriter and musician. As far back as 1981 he was an advocate for the artists against the corporate record folks.

He refused to release Hard Promises when the label decided to up the price by $1. He found that unfair to the customer. The company eventually backed down. He'd go up against them at other times too.

Even one of his later released, the Last DJ, is blatant middle finger to Clear Channel, iHeart Radio and the like. Not so coincidental, his Sirius XM station - Tom Petty Radio - was one of those who actually deserved a singular station.  Jimmy Buffet?  oh fuck NO!  the Dead?  Nu-uh.  I question whether Springsteen or Elvis should. But I enjoy Petty's station, though I no longer know its fate, as he was its DJ.

Peter Bogdanovich actually made a Petty documentary a few years back - maybe a decade ago - that is FOUR HOURS long! The surprising thing isn't the length, the subject or that there was an acclaimed director (hey, he did What's Up Doc?). It's that it is actually excellent.

I don't think I have a favourite Petty song. I liked his collaboration with Stevie Nicks on "Insider". It was a song he wrote for her debut solo disk which she basically rejected for "Stop Draggin' My Heart Around" (which was an unreleased Heartbreaker song with just Nicks' vocal added).  I like "Walls" from a Ed Burns movie, She's the One.

I remember sitting in CharBar during my freshman or sophomore year, playing "Change of Heart" on the jukebox a lot. I love "I Need to Know". But if I can only pick one for this post (not that there are any rules, being it is my blog!), I'll go with "A Woman In Love (It's Not Me)".

It is one of those songs that accentuate Petty's mush-mouthed singing, but it still works. The melody is good, the rhythm section is great ("hi Stan!!!. .....call me!).

I am truly sorry Petty is gone. The irony of the entire situation is that his final tour ended a week ago. He was stopping so he could be at home to watch his grandchild grow up.


Song by: Tom Petty & the Heartbreakers
Posted by Blobby at 12:06 AM

Without denying all respect due to the loss of the remarkable man, I wonder if I'm alone in thinking that the pic you post is one of........No, I won't say who it very much looks like, only for continued respect. R.I.P. Tom.

madge? what you doing there?

You actually said it, W.Q.! Given the newness and sadness of the event I lacked the cojones. (Enough now!)