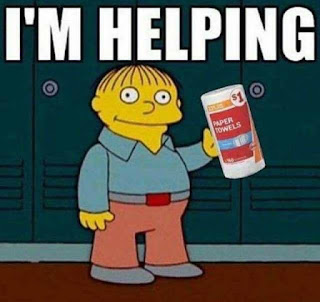 Do you think that he took Sondheim's lyrics to heart.....and as reality?

Is there a bigger moron in the world than SCROTUS?

I've asked and answered that question many-a-time in this here blog. .....and as far as I can tell, that answer ain't changing anytime soon - - - if ever!

I know that technically the President doesn't have a publicist, but I'm thinking this guy should get one.......but then I remembered he used to pretend to be a publicist to tout brand Dump, so that would not really work.

But will no one save this man from himself?  (I think I've axed that question before too.)

That is kind of rhetorical when some of your senior staff thinks you're a "fucking moron".

Not only can they not save him, he doesn't want to be saved.

Really though?  Throwing paper towels residents of Puerto Rico?  I don't even think they were Bounty - the quicker picker-upper. That's gonna be a fuck of a lot of paper towels to soak up a category 5. ....and even if they did, now they have another problem on their hand.

The better part of his trip was the tried upon guilt trip - telling the resident that they really put a kink in the U.S. budget. Maybe I missed it (though I know I didn't), when he told Florida and Texas the same thing?  Oh that's right - - we had those super storms budgeted.     (eye roll emoji here)

What we didn't have budgeted were presidential golf trips. 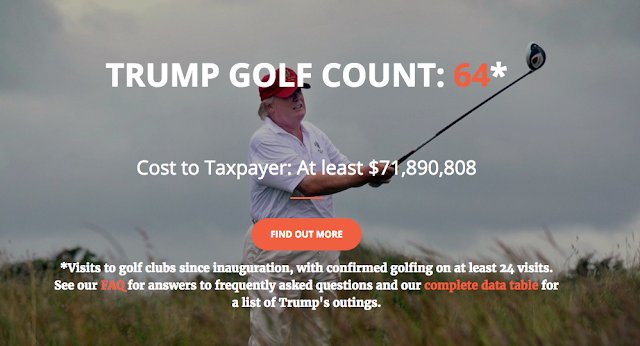 $72 million buys a LOT of Brawny.  And had they gotten them on double coupon day, I think PR would have been set for life......or at least until the 2019 storm season.

All I can hope is the Puerto Ricans who came out to see him were there to jeer and not cheer. And maybe they'll remember his lack of inaction when it comes time to vote for him or any of his candidates.

Oh that's right - PR is a territory where residents can vote for president.  Yes, let's hope they remember, indeed.

it's like he doesn't want to get close to the people, so he will chuck a few paper towel rolls at them. obama would hug people and listen to people.

tillerson is right - the dump IS a moron!

I’m loving the San Juan Mayor Cruz. We need more politicians like her, a lot more.