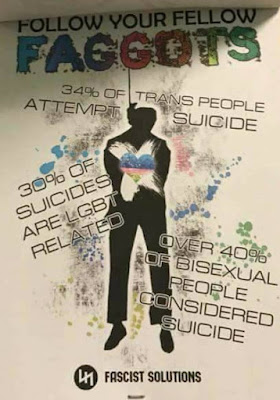 Yeah - take a good look at the poster.

The hate is out there, and stapled and hung on college campuses. .....or at least at Cleveland State University.

The kicker isn't that CSU took down the offensive posters, it is that they said had the group - Fascist Solutions - followed the proper procedure to post notices, the signs would and could have stayed up.

That is fucked up.

I'm good with free speech, but not hate speech. There is a difference, and a line.

But the 'bullshit' comes from the tried and true, the classic:  would a poster calling for people of colour to die be allowed? I'm guessing not.

Would a poster condoning rape or sexual abuse fall under 'free speech'?   Nein.   Well, maybe. Universities have a way of ignoring that whole campus rape thing, so they might just be ok with it all.

It's all so hypocritical. Even the president of CSU had to make a second statement (after the free speech one) finally saying he was "outraged" and that it message was "reprehensible".  And it was - his reaction, that is: outrageous and reprehensible.

And let's be clear, Fascists - 34% of trans people don't just attempt suicide......they are driven to it. By people like you.

The 30% of LGBT suicides stem from hate and bullying that they get from assholes like the group in question. Your massive homophobia, your insecurity about yourselves, you have to have to make other people feel bad for you to feel ok.  Not even good.....just ok.

You're total pathetic losers who should be forced to drink bleach, be cut with razor blades and then have alcohol poured all over you.

Song by: Laurie Anderson
Posted by Blobby at 12:10 AM

It seems blindingly obvious, but you've only got to substitute the word 'faggot' by 'nigger', 'yid'. 'honky', or any other word derogatory to another group, and most of the country would be crying "TAKE IT DOWN!" However, as frequently happens, if it's against the gays then although it might be considered 'bad', it's not really THAT bad! - I just don't get it. :-(

"The kicker isn't that CSU took down the offensive posters, it is that they said had the group followed the proper procedure to post notices, the signs would and could have stayed up." - WHAT THE EVER-LOVIN FUCK???

start by disbanding the group of h8ers on campus; this is violent h8 speech, pure and simple. h8 speech has no place in respectable society!