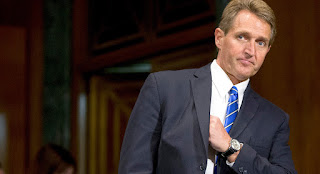 710 heard Wolf Blitzer on CNN Radio on his drive home last night, that today (yesterday) would go down in history.

But other than a news cycle....or maybe two, closer to his departure date, I'm not sure it adds up to a thing.

By my count it's 4 GOP Senators against BLOTUS; 50 with him (or to wussy to say otherwise). Sisyphus had an easier go of it.

While it's easy to say 'resist' it is tough. Tough to do. Tough to stomach.  Tough knowing that this turd is getting away with everything.  ....and then there's that cow of a press secretary:

“Based on previous statements and certainly based on the lack of support that he has from the people of Arizona, it’s probably a good move,” Elsie* said.

Isn't it rich? Her bosses disapproval rating just hit 56% (his lowest yet), and that sentence comes out of her pie hole. If that be her logic, wouldn't the  he should resign too, no?

Pythagoras and his theorem spring to mind.

But Wolf is wrong. Flake was right in his words, but he is saying it with one foot out the door. Mind you - the man has 13-14 months to make BLOTUS' life hell.

Let's hope he does.

Song by: Jack Johnson
Posted by Blobby at 12:03 AM