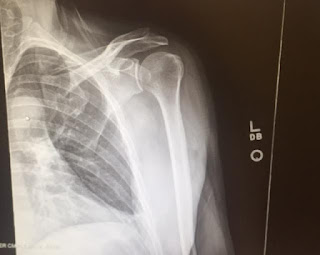 You've seen a similar picture like this in the blog a little over five years ago.  Trust me, the image is new.

The problem is old, but the picture is brand spankin' new - well at least as of two days ago it was.

My rotator cuff is acting up again. Not enough for surgery - which is good, but bad enough for yet another round of physical therapy, and should that not work, cortisone injections.

After my last round of PT for the shoulder, it felt pretty good for a long time.  I never quite went back to weightlifting, as the doctor said I probably shouldn't.  I most likely would have ignored it had it not been for two subsequent elbow injuries (both requiring PT). Granted, I would not have attempted to lift as much as I had been doing.  Yoga is quite limited - as just getting into any warrior position is almost a non-starter. Warrior II is one of my fave.....but I can tell you that could not be happening these days. I could never get into position, let alone hold it.

So, I don't quite know what set this off.

I started waking up in the morning with it hurting. I do sleep on that side, but as much as I tried to change my ways, five decades of sleeping on that one side is a tough habit to break - even with a pain level of 7.

It got to the point where physically putting on my shirt not only was painful, but I had to be a contortionist too, just to get my arm in or out of a sleeve. Reaching for a control in the car would make me wince.  I finally broke down and went to my ortho guy.

Sad isn't it?  You hit 50 and now you have to have "an ortho guy".  When I was 12 I had an ortho guy....he just happened to be my orthodontist.  Now I see Dr. Flannery. He's nice enough and tries to keep me from being cut on or even have steroid injections.  I was for the cortisone, but he tells me how it will deteriorate my tendons.  So I'll hold off as long as I can. Perhaps physical therapy will be my cure-all.

If that doesn't work, onto getting shots. I'll find out how many and how long it takes to hurt my tendons. I'l weigh that against my current age and do an entire risk:benefit analysis and go from there.

Here's hoping I get a cute therapist.

I'm unfamiliar with this "five decades of sleeping on one side" concept. I sleep on all sides. I roll back and forth all night long like a washing machine agitator. Sometimes my roiling pulls the fitted sheet and mattress cover right off in my sleep. My side of the bed is mess.

Sorry there Blog buddy. I know all too well your pain since I not only have an ortho Guy but he has already sliced and diced the left. It was a triple shoulder surgery including rotator cuff, bicep tenodesis and acromioplasty. Afterwhich I was PT twice weekday for 9 months. Great insurance with no co-pay for all of it. The Right has had PT and two cortisone shots in the past year and is thankfully quiet and virtually pain free at moment. I had a total of three cortisone shots over 18 months with PT before the surgery on the left. Today I’m back in yoga twice weekly and can both Warrior 1 & 2. I also am lifting weights again twice weekly. The surgery on the left was painful with a slow recovery but well worth it for the it is completely pain free at 16 months post op.

I flunked PT, but the tear near my right rotator cuff healed itself while my frozen left shoulder decided to stay as is. Now I'm only half a T-Rex.
You know you're getting old when you think "Monty Hall died! He was only 96!"

I hope your PT is at least helpful besides eyeful