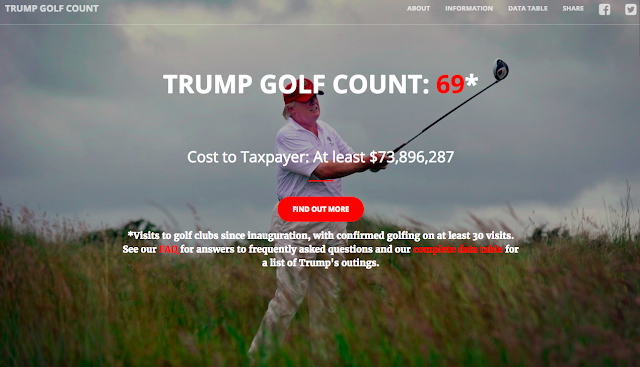 The site tells of all his golf trips, including the number of rounds he played, sometimes with whom. It says the start and end time of his rounds - some of which I just do not believe.  I just don't believe you can finish 18 holes in 3 hours and 15 minutes.  Maybe he only played the back nine.

TGC will also tell you which resort and club at which he played (though most of them are his own properties - shock!), and if he actually golfed (though they don't seem to know for sure all the time).

The best is the cost for each trip and the accumulated total cost to you and me. That's better than some of the weak graphs they have.

What they do not have is how he scored. THAT could be priceless, as for all the time that lard-ass spends on the course, it'd be great if he were shooting 115 all the time and not improving.  (Par for most golf courses is 72, btw.)

What they also need to do is compare it to the number of times Obama golfed side by side. I'm guessing you'd have a lot of blanks for Barack in a comparison next to BLOTUS* (I think I'm changing from SCROTUS).  Oh - you'd want Obamba's cost too......just for that comparison to the guy who said he'd be too busy to golf during his presidency.

I know none of this means a thing to the asshats who voted for him - and the things he said / promised. Still, it's important to systematically chip away at this troll of a man.....continually....until he topples over.

Anyway - come back often. I fear the numbers will continue to grow.


*Biggest Liar of the United States
Posted by Blobby at 12:09 AM

If he ever claimed - and who would put it past him? - that he'd done a complete round of holes-in-one there'd sure to be some of his crazed disciples who'd believe him. ("A miracle! - proving that God is on his side!")

Ack! Well that picture ruined my breakfast! It's gotten to the point where I have to decide to read stuff before eating and ruin my appetite, or after eating and run the risk of puking it all up. Either way, I lose weight, so win-win.