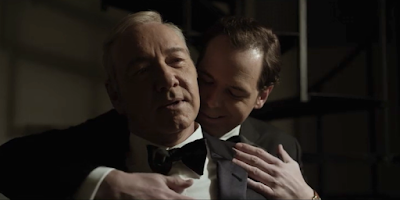 "It's all so delicious"......as Tynnyfer* on Parks & Recreation would have said.

Now, I could be talking about Kevin Spacey or Mueller's indictments.......or both.

I need time to digest the FBI investigation shit - so I'll hold off on that.

I should take time to reflect on Spacey, but whatever......I'll do it now.

I've said before, and I've stuck with it: the man has always creeped me out. Even back when he was in a show called Wiseguy back in '88. I'm not 100% sure he was acting and nothing he's done in the last 30 years has made him any less, well.....creepy.

I loathe that the man is gay. I mean, I think everyone knew it.....he might have been the last to know. But it's like I don't really want him in the club, and not just for skeeving on 14 year old boys.

That is when he isn't skeeving with guys in a London park in the middle of the night, way back when.

Can we just start with his coming out: "choosing" to live as a gay man.

I'm sure there is a pseudo-retraction coming about 'that being gay isn't a choice' statement, but just fuck you. Both you and the publicist who wrote your shit knows better. Or should. You're hacks. The man is just a walking penis with ears.

And the context in which he finally came out:  a child molestation claim.

I guess (?) kudos to Anthony Rapp for forcing the issue.....and to help get his name out there for his new Star Trek series (yes, I'm cynical enough to assume there are ulterior motives for this).  Oddly enough, I had to look him up.  I know Rapp from one thing:  Law & Order SVU.......where he plays a character who was molested by a teacher when he was a teen.

I joke about the molestation, but it's not funny.  What also is not funny is Spacey's three legged response. Yes, he apologized.............if it happened.  I guess that's more than anyone's getting from Harvey Weinstein.  But then Kev had to go blaming / explaining away via time and booze. Even Harvey didn't do that.

This Weinstein things has been great though - all bets are off for those stalking, creepy, werido motherfuckering perverted assholes.   .....and Kevin Spacey, you're one of 'em.

*her name was Jennifer, but she rebranded herself.

ick; he's a perv AND a sex offender.

I almost posted on this yesterday I was so pissed off by him coming out to distract from his crime. Who does he take cues from these days? Someone in Washington I suppose. Deceitful distractions and no integrity.
He
Is
Disgusting
-Period-
He can say he’s gay all he wants and he ain’t in my club. He can rot in hell along with the three men who molested me when I was a teen.

I know it is probably just semantics, and I'm not defending his actions, but he said choosing to LIVE as a gay man, not choosing to BE gay. Doesn't matter, a perv is a perv.

I first saw Anthony Rapp in Adventures in Babysitting. I still love that movie. His career has been reasonably steady with a lot of Broadway stuff, guest spots on t.v. and he was terrific in Rent.