You Look So Fine 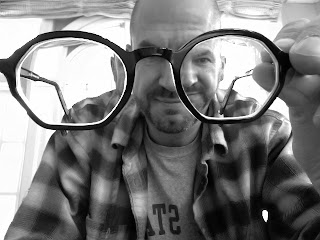 Actually, they came in on Thursday, but you know Friday, to go out, I would to have been Nanook of the Northeast Ohio.

It wasn't much better yesterday, but I was already out cuz I went to the gym - yes, I got my sorry ass out of the house to go lift and spin. So after wards, I just trekked up the the glass place and picked them up.

I like them and everything is crisp and clear, not that my prescription has changed in 2+ years. But it's a new and different look. I'm diggin' it. As if anyone else will - who knows.

Almost right after getting home, my mother called and asked us to lunch. Sure she was being nice, but in reality she had three of her grandkids with her and I'm sure wanted a break where she didn't have to be the only one to interact/watch them. ...and hey, it was going to be a free lunch for me - so take that Milton Friedman!

Naturally, Milton got the last laugh on Blobby. Ya had to see that comin'.

Those kids. One opted to point out that my new glasses were 'geeky'. ....and that was just the start.

I can't argue with that, but I purchased them knowing full well of that affect. These kids will one day the desire for a little individualism. They should see the other pair of glasses I wanted to get am getting. Total geek.

Granted, I did not eat the best at lunch. Not the healthiest, that is. My 12 year old niece said it didn't look like I worked out. And at some point, with my flannel, jeans and boots, one of them allegedly said I looked like 'a farmer'. (I didn't hear the comment.)

The littlest one told his sister to be nice, since I am kind enough to let them stay over, play games and have fun. I told him he was spreading it on a little thick - especially for a six year old.

My mother didn't say if she liked my glasses or not - so I'm taking it as a 'no'. She did comment on where I got them and 'aren't they expensive there??'. Mommmmmmm.

I have to say, I do like the artsy-fartsy image I took for the title shot (really, click on it to enlarge). But it doesn't give you a great sense of the glasses, per se - does it? 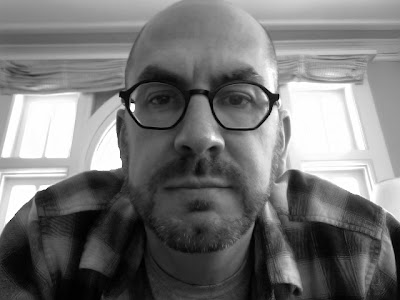 First, on Monday you need to run, not walk, straight to your attorney and disinherit a certain 12-year-old.

Second, you now bear a resemblance to a certain writer who is a regular contributor to the "cool" NYC newspaper. Can you guess who I mean?

They're so very, what's the word, hexagonal on you.

Frankly I would be worried if my Ma really loved something I wore or did with my hair.
They look good, geeky but good.

me likey VERY much!

I'm told that your outfit is called "Seattle gay." So you're good.

Wait a minute. You have a fuller beard all of a sudden. Going for more?

I like them.
Nex time memorize DEFODPCT
as it is it the 20/20 line.

A little geeky, but you have some wiggle room. If the frames had been thicker, then you'd be in the upper echelon of geekdom.

I was thinking Delight and that song "grove is in the heart". They look great on you, on me, I would look like Mr Magoo.

They would be uber-geek if you wrapped tape around the middle of them.

But they look good on you.

I think these glasses make you appear smarter. That works for Christopher Boldt as well. Good for you guys! DO WHATEVER IT TAKES. :)

I like them on you. Very Handsome and smart looking.

My comment was SAID WITH LOVE... and totally payback for writing I had a BIG HEAD on my blog. LOL.