Love is an Ocean

It will be in the 20s in the morning (probably), and only maybe in the mid-50s during the height of the day - and you know what? That's still frickin' fine with me.

I am in Wrightsville Beach for a work meeting. Not a client, but a team meeting. I think the plan was to meet somewhere warm(er) that wasn't Florida, but Mother Nature hasn't really cooperated this last month or so with North Carolina.

That all said, the mornings are as cold as Cleveland, but the day time highs are good 30 degrees warmer.

....and then there is the sound of the ocean. How how I love the water breaking close to the shore. It was a drag that we didn't get hear or see the surf this year. But I'm thinking this might be a very cool, low key place to spend a week this upcoming summer. We could even crash as Jon's place for a day or so.

sssshhhh....he doesn't know that yet.

Apparently here, and down in Wilmington, is where they filmed Dawson's Creek. I feel James Van der Beek's presence all around. Him and that Jay Leno chin of his.

But I checked in and immediately opened the sliding glass door that overlooks the beach and the Atlantic. People I'm here with thought I was nuts - think it too cold. Fuck that. It's not balmy, but it's not Hoth either. ...and you get to hear the sound of the waves.

If ever on the Actor's Studio (well, I guess I'd have to take up acting - though they've had Jay Leno on there for some g-d damn reason), and they ask me that series of questions, the one on favourite sounds, it would either be the waves hitting the shore - or possibly the purr of a cat. There is an off chance it might be rain hitting the roof. I'll go with my gut whenever Mr. Lipton axes me.

This morning, I will walk the beach and watch the sun come up. I will still have time to get back to the room and shower before my morning meeting begin.

...and just because I can, here is a heinous picture of me, yet it is the best one I took. I finally gave up figuring it wasn't gonna get any better. 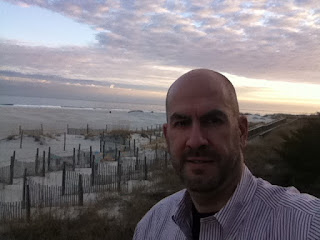 Song by: Marti Jones & Don Dixon
Posted by Blobby at 5:37 AM

I wish I was half as heinous as you. Nice pic. Great post. You make me long for the waves...

Good grief—that's a great picture of you. I can't figure out what you're looking for.

That is a glorious seascape behind you, too, even in the cold. But since I almost never see the dawn, I'm partial to the sunsets in Sarasota. I'll get to see those in February, and I'm counting the days.

I have to live near the ocean. It's part of my DNA and I feel claustrophobic otherwise.

I too, love the sound of the waves. Jim's dream is to one day own a house by the water so that he can spend all day listening to the surf...especially in the dead of winter. For some reason, he LOVES the idea of seeing a winter storm coming in from the sea. I'm fine with that...as long as the house is built up high enough. :-)

Happy and safe travels! Isn't the ocean just sumthin' else......

First of all You are a very Handsome Man. Love the picture. Second I hope you the very best in the coming year.
Third I do hope you can keep warm. I would love to snuggle with you with the sound of the surve coming in.

NOTHING wrong with that pix as far as I can see!

I think you are one of the most handsome fellows in blog land.