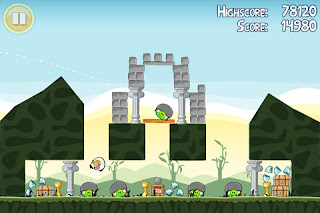 I have a new obsession. I've had it for weeks now. Months actually.

It is all the rage - it has been, as it was the biggest iTunes application download of 2010.

Naturally, I downloaded the 'lite' version, since that was a freebie. You know how cheap I am. But I pretty much breezed through most of the levels from the time I first booted it up on the way from CLE to the time I landed at LGA.

It took Denton a while to convince me to put a crowbar in the wallet to spend $0.99 for the full version.

It might be the best 99 cents I ever spent. The game really soothes my OCD, while perpetuating it at the same time. It sounds crazy, but it is true.

Why pigs have army helmets and TNT is beyond me. Nor do I understand why birds who can actually fly need slingshot launches, but who am I to know these things?

Normally, I can figure out the levels pretty easily. I get which birds do which special things and the trajectory you need to knock down structures and crush the pigs. I like how the pigs get black eyes when part of the debris hits them, but I hate when the swine become cocky when you don't kill them and they smile, showing their teeth to you, in that superior, "ha-ha", kind of way.

There are about 21 different challenges on each level. Right now I'm on level six, so you can do the math yourself how much I've been playing since December.

Yesterday, I finally made it through level 6-14. Honestly, it had been like two weeks of on and off attempting to make it through. Using toucans are not the easiest bird to bring down pigs or their houses - whether made out of hay, sticks or brick. (see how I made a reference to the three little pigs there?)

I will admit being stumped on level 6-14 and even back on 3-15. When you say it or spell it out, it sounds like scripture passages. They way I was muttering 'g-d fucking damn it' when failing for hours on end to get past them, you'd being to wonder if evil was upon me. It was.

Admittedly, I used Goooogle to look up 'tips' on how to get past these levels. It worked for 3-15, but the biggie, 6-14, it seemed I was completely on my own. Those suggestions meant nothing. Nothing, I tellz ya.

But last night, I finally made it past 6-14....and now it's time to set the game down until my next flight, which is on Tuesday. It's time to join the land of the living.

Song by: Juliana Hatfield
Posted by Blobby at 7:30 AM

Just from the fact you're so gripped makes me not want to download it. But wait, a FREE version you say???

Whatever you do Blobby, NEVER try Farmville or crack.

Probably in the next few weeks we will be getting smart phones. I'm so afraid I will find these games and disappeared down the rabbit hole with them, never to be seen again! they sound jolly good fun.

I'm eying the Verizon iPhone with something akin to lust. However, I know myself well enough that I must never try Angry Birds—for the same reason I never tried to solve a Sudoku puzzle. Once in, I may not emerge. I have a family who still wants to see me once in a while.

I only play Angry Birds whilst on the toilet. Surprisingly I'm only at 2-21.

So far, I've completely avoided this game-- other than playing a slingshot or two on kyles phone