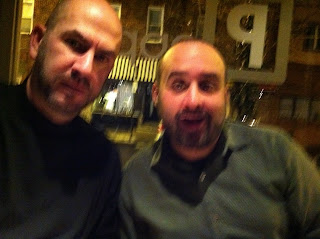 Normally when I travel for work, I don't do much on the "downtime"....mainly because there really isn't much, if any. If it's not client dinners, it's team-member dinners, though I usually duck-out of the bar hopping afterwards.

Yeah, I used to be a big drinker, but I'd much rather go back to the room and veg. It's official, I'm an old man.

When I used to travel to DC, I'd try to have dinner with some friends and totally break away from work stuff. But I don't travel to DC much anymore and where I go now, not many of my friends reside.

So it was great fun that when in Philly the other day, I got to have dinner with my friend Sal. He's re.thinking real estate. And when he's not, he's fun to hang with.

Sal took me too a restaurant that is called Salt & Pepper. I'm not sure if it's new, but it is in a new location - according to those in the place. I have no reference, so it's all new to me. I do not think the menu is updated on the website, some things remain, but isn't quite the same items. And the site says BYO, but they clearly have a liquor license now. Oh, and the logo on their door is way cooler than the one on the website.

The irony? There are no salt or pepper shakers on the tables....or anywhere in sight.

The place is run by the husband of a co-worker of Sal's. Rachel is really really nice and I didn't mind that she hung out at our table - as she was tending bar and taking our order. She also sent over an appetizer that I didn't get a picture of......however, I did get pics of our other food. 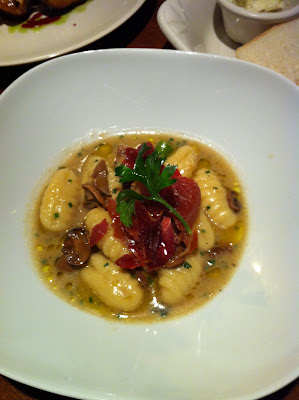 A Gnocchi appetizer with crispy pancetta. I like Gnocchi, but I couldn't help look at these and kept coming back to that they looked like those bugs that would crawl out of ears in sick bay on the Star Trek Enterprise. At least they tasted good. 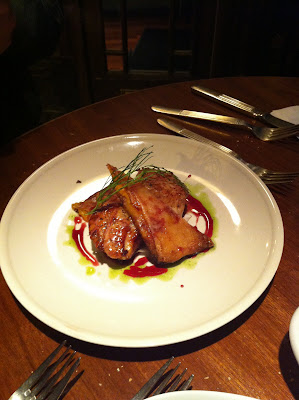 Hard to see, but Sal got a scallop appetizer. The scallops were incredible. I didn't get a pic of the rolled sashimi with wasabi that Rachel sent over as a courtesy. 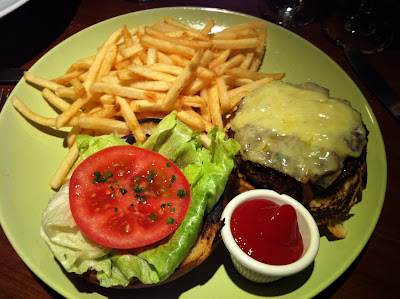 Yes, a hamburger was my entree. A 10 oz one with Gruyere. The chopped parsley on the tomato was a nice touch. Honestly, after the appetizer, I didn't even need the 8 ounces that I eventually ate. No dessert was consumed, though a full bottle of red wine was.

As you can see from the title image, the pics we took (and had taken) of us, were only so-so. I kind of like the one atop, even if Sal is making a goofy face. Sure, the flash would have made them clearer, but we sat at a window seat and the reflection would have been horrific.

I took that pic, but the ones that Rachel took of us came out no better - well, except for Sal's goofy face. There is a much better one of him, but I cut the upper half of my face out (not a deal breaker for any of you - that's for sure), but it's my blog....not Sal's.

....and for the record, I had a hard time with the post title. I have very few songs with the words 'salt' and/or 'pepper', so you just got a Salt-n-Pepa song title, which I don't own. It's the only one I could think of except for "Let's Talk About Sex".....and that just seemed wrong.

But if you're in Philadelphia, I highly recommend Salt & Pepper.

I'm glad you explained the post title. I was wondering how it fit.

The gnocchi looks like it's in a sea of oil. Was it?

glad you had a good time

Gnocchi and french fries. I want both. And the lettuce too.

MMMM...that gnocchi plate looked delicious. I'll have to ask my friend if she's ever been.

How weird is it that I thought of Star Trek too with that gnocchi—but my impulse went toward Klingon meals.

Good times with good friends are the moments we remember. Looks like you had another one, old man.

no pepper?
I put pepper on everything and I cannot get enough of it.