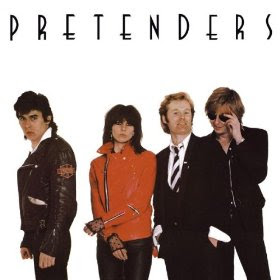 It was January 1980 and it was the first time I had heard "Brass in Pocket". I thought to myself, oh the '80's are gonna be a great time for music.

With the Pretenders self-titled debut, they possibly have the best opening and closing songs ("Precious" and "Mystery Achievement") of any record, not just a first time outing.

Overall, the entire disk is outstanding - and still holds its own. Ok, truth be told, I never liked "Space Invaders" and "Brass in Pocket" wore out its welcome two decades ago, but the rest of the disk is solid.

The band is incredibly talented, even though Chrissie Hynde got all the attention. Martin Chambers is probably the best drummer I have ever seen live. James Honeyman-Scott and Pete Farndon were great too, though clearly short-lived. Their guitar and bass work were phenomenal.

They cover the heavier rock stuff ("Tattooed Love Boys", "The Phone Call", "Up the Neck" and "The Wait" - along with "Precious") and the lighter fare ("Kid", "Lovers of Today" and "Private Life") - and it all works. And one cover, the Kinks' "Stop Your Sobbing", which is still classic.

Chris Thomas did a great job producing the band and the disk and making it work on all levels.

I loved their second and third outings too, but they never truly topped their debut disk. It's still fun to listen to - even {gulp} 31 years later.
Posted by Blobby at 5:07 AM

Oh I love Chrissie Hynde. I once saw her at a small dance club in Vancouver and it was just an amazing, crazy, electric and exhausting 3 hours. I especially liked the song Middle of the Road.

31 years Mr B? Jeez! And the live album with the ?Brodsky string quartet is good too.

Memories! Listening to the Pretenders at the International Stud in NYC's Greenwich Village.
Sascha had the best jukebox in town.

The Pretenders debut - wow, 31 years! I loved that album, still do.