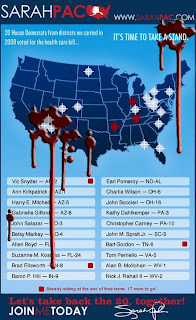 I've had a day to try to take in, or deflect, the rhetoric of the weekend and of what this country keeps coming to.

We, as a nation, are completely fucked up, it would seem. That part does not surprise me, but the people who think they are here to make it better are really deluded. It's like a fucking virus that passes from one stupid person to the next.

I think of Steven King's Langoliers where, whatever evil it actually was, just swarms and ruins any semblance of life. These folks want change, but don't really know how to get it with out spewing hate and lies - and while they don't have any of the answers, it is worse that they think they do.

Naturally, these are the same folks who blame the 'liberal media' for how this country and political system has deteriorated.

Let me mention something about the 'liberal media': PLEASE tell me where it truly exists in any major market!!! The Huffington Post isn't that widely hit or used that everyone is getting their news output from them.

Since I had just watched NBC's Nightly News, I was waiting for Kelly O'Donnell to mention Sarah Palin's name when the cleaned up/original image from her PAC was shown. It wasn't. It was dumbed down to say a 'tea party' something or other.

Sarah FUCKING Palin's name is right on it - along with her signature.

Call it out liberal media. Oh wait, they are. Let me try this again:

Call it out general mainstream, too scared to say anything of consequence, media!

Yes, I get free speech and that Palin's PAC can do what they did. Yes, I get that any of right wingers will say the targets are just to 'vote them out of office and nothing more'. But using gun sites?? Are you fucking kidding me. You're dealing with a reactionary group....and you know it. You're actually counting on it.

Here is the liberal media on this - back earlier in 2009 when it came out, there was barely a blip on this campaign from them. Maybe Olbermann and Maddow. But you can bet you sweet ass that if the DNC had done the same ad, Fox would have been all over this shit.

After the 2009 mid-term election, Palin boasted that 18 of the 20 listed had been eliminated and that there were still two more to go. Well now, maybe they're down to one. Happy?

Yeah, I get that the shooter was a complete loon, but I don't see how or why that excuses the likes of Palin, or her advisers (who will be the ones to take the fall - if it ever comes to that - for this). They put it out there, they plant these seeds. Seeds of hate, seeds of destruction, seeds of murder.

Everytime I think I'm fairy desensitized to shit like this, something always scrapes away to find a new layer.

I have no answers. I'd like to have answers. Right now I have anger, but it is so easy to become like they are and give into that. In some ways, I think that is the only way to fight them, but on other levels, what does that make me? Or us?

Montreal or Costa Rica is looking better and better. Maybe that's my answer.

Song by: Shawn Colvin
Posted by Blobby at 5:54 AM

Why is everyone so terrified of Sarah Palin? I just can't comprehend it. The worse things she does, the more stupid things she says, just makes her stronger. It's a paradox.

Every time I hear my right-wing, old, Republican, bigoted step father refer to his "Glock" I get nauseated. And now.....I see how he could very well be one of those people....one of Sarah's people.

Poor Ms Palin - she pardons at turkey and another one dies on Youtube. She shouts 'drill baby drill" And the Gulf of Mexico becomes a disaster. She targets politicians and they get shot.
The stupid person keeps putting her foot in her mouth PRIOR to the problem.
A few more of these and even her groupies may give her up!

I keep saying, "I don't have to get narded up about this, I live in Montreal."