Well, Fuck Me Gently With a Chainsaw 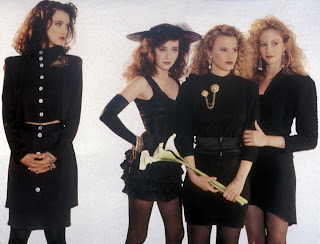 The other day week, Becky was lamenting on how girl cliques have started earlier and earlier in the life of a female. 5 year olds, to be specific. FIVE.

Though she was looking for support I had a hard time conjuring up a positive thing to say. Not because I didn't want to, I love Becky and her daughter. I couldn't because I've been watching in horrid fascination at my oldest niece, who turns 16 today, and what she has been going through since attending high school. Well....high schools!

I've written and deleted most of this post at least a half dozen times. The specifics of how she is treated and allowed to by the school is more than painful. Not only in a public school, but a private girls school - which is where things went from bad to worse. I don't think I'm just saying this as an uncle either.

The most accurate thing I could think to say to Becca was that Mean Girls doesn't even begin to scratch the surface of what it is like. If you must assign a movie to this kind of scene, it has to be much closer to Heathers. Even that might be too kind. At least they had corn nuts.

The great thing is, my niece is extremely intelligent, has a great sense of humour and has developed somewhat of a tough skin. Her entire high school experience has to be shit - and that's saying something.

She also has extremely supportive parents. Ones who are willing to do whatever is necessary to change the situation - including putting the house they just bought and have yet to move into back on the market, just so she can attend another school. ...and they let it be their daughter's choice. She opted to go back to the public school because she did not want to be 'the new kid' again. Fair enough.

I see this as a positive in so many ways. First that she is making the decision and not her parents. More importantly, she can also use the mindset of leaving that school to navigate the next two months. She could, in theory, find something completely and utterly liberating: giving the school and student population the big FUCK YOU.

Can you imagine if we lived this way? I mean - really lived it?

The school is going to lose a high-ranking honor student and state level athlete. Clearly they don't care. The kids haven't allowed her to be part of the group and have been mercurial at best - but now she doesn't have to try to foster those relationships.

She can go about her routine for HER and not give a fuck about what anyone thinks, says or does. She has the opportunity to give these wenches (and I'm being really nice here) the proverbial bird! And she can do it daily!!!

Not only that, I think she'll go back to her old school with some of that attitude. Two more years of high school - sure. But she has a few friends there, not many. But now she has the thought process of - 'who cares', but in a healthier way - not a Heather Chandler kind of way.
Posted by Blobby at 11:38 AM

At first I thought the picture above was from when we did drag in 1989. Your niece sounds like she'll make it. So shitty what girls have to go through!

Honey - NONE of us looked that good. You were just drunk!

I will have to get the rest of this story from you one day...but maybe after my girls are safely out of high school...