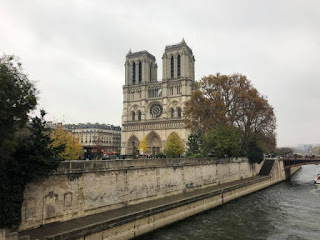 I am not an emotional person - unless it has to do with doggies or kitties. I'm just not.

Of course I feel bad about a landmark like Notre Dame going up in flames, but more about the architecture and history than what it is....or was, assuming they can save any of it.

I have no emotion for a building. Or at least that one. I think I kind of did for the twin towers. 18 years has clouded my memories.

When we were in Paris, going to (let alone into) Notre Dame wasn't even on our list to see. We walked near it, saw no line and shrugged, "why not?".  And it was free.

Lots of carved wood and religious iconography. It's not quite, you've seen one cathedral, you've seen 'em all kind of thing, but it's not too far from that either.

I've been in churches. Truth be told, I was bored early on. And me being bored was way better than the photo ops that were doing on there.  People with their arms stretched out with a rosary dangling from their hand, so a friend could catch a picture of them from behind.

Faux Worship.  I love it, though I hated it.

I will say this - I totally missed knowing you could go up and look at the gargoyles. THAT I would have done.  Looking at a rose window or a dead Jesus didn't do much for me.

Oh - and the loss of / in the fire:  part of the crown of thorns that Jesus wore.

As 710 said:  can I see their Certificate of Authenticity?   No shit.


I'm sure it was devastating to watch burn. I'm also guessing, if it were construction related, that the company doing repairs don't have enough insurance to cover this damage.

I did find it interesting that Notre Dame has more visitors per year than the Eiffel Tower.  I wouldn't have thought that - but don't discount the power of 'free'.  Or a bunch of people who are afraid of heights.

The thing with something like this is: it's not really gone.  It will be immortalized in another fashion, and that's not a bad thing.  Things change. It's the nature of it all, and it's rarely pretty when it happens.

it is one of those catholic churches, so I would burst into flames going inside. I went inside in 1970. I'm still here. that was then, this is now.

a wood roof and the rose windows can hopefully be replaced. the architecture was not destroyed due to the stone construction. it's a symbol of paris as much as the eiffel tower is.

I find what has happened ineffably sad although, as you say, it's 'just' another church, though here on a truly grand scale. Of course we all appreciate that it doesn't compare with loss of even a single life, but even so...
I first 'discovered' Paris in 1984 and it immediately became my favourite of all the cities in Europe which I knew. For 10 years from then I'd go for a week three times a year, at Easter, at their annual 14 Juillet celebrations and, for good measure, a random week in November. My cheap and clean small, gay-friendly hotel wasn't far from Notre Dame and every night after cruising the bars, discos (and other 'places') - terrific gay scene it had - to get back to the hotel I'd have to walk past the looming dual towers of the Cathedral at around 4 or 5 a.m. Those were the days. I haven't had the chance to return to Paris since the early 90s but although I'm now too old to sample fully the delights it then had to offer I still like to thank that despite inevitable changes, even today it might remain top off my league.

As for that 'crown of thorns' - obviously a myth created for the gullible masses (no pun intended) - when I lived in Cologne my flat wasn't far from their own cathedral (still the largest Gothic such in the whole of Europe, in terms of dimensions) boasted owning the tombs of the Three Kings or Magi - when in fact the Bible makes no mention of the number, only of three gifts. This latter and the Notre Dame claim to have the original authentic 'crown of thorns' are, of course, each as preposterous as the other. Adds to the 'romance' of the places, though.

I'm glad you wrote this, in a respectful way, as I was feeling the same but didn't know how to express it.